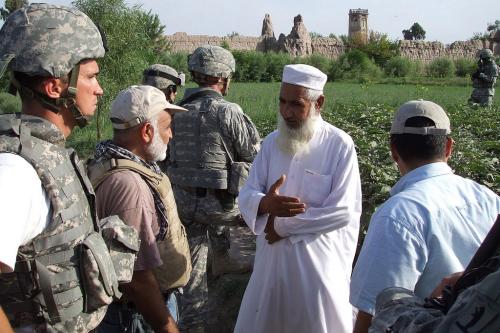 Last Thursday, a somewhat motley crew gathered at the State Department to discuss the U.S. government’s agricultural efforts in Afghanistan. The panel featured Secretary of Agriculture Tom Vilsack, Special Representative for Afghanistan and Pakistan Richard C. Holbrooke and newly confirmed USAID Administrator Rajiv Shah (who had been sworn in earlier that very day).

If you have been listening to what many in the Obama administration have been saying recently about U.S. counterinsurgency strategy, the first five minutes of the panel’s discussion may be just as confusing to you as it was to me.  Each speaker took their turn pointing to agricultural efforts executed by the United States:

However, the day before, Secretary of State Hillary Clinton spoke at the Peterson Institute for International Economics, saying that “By offering technical support and making strategic investments across the entire food system – from the seeds that farmers plant to the markets where they sell their crops to the homes where people cook and store their food – we can help countries create a ripple effect that extends beyond farming and strengthens the security and prosperity of whole regions” (emphasis mine). Unless there had been a radical shift in policy in the 24 hour period (or we all accidentally took a  DeLorean trip) its seems odd to have one U.S. official pointing to agricultural development as a lynchpin in our strategy to build long-term security in Afghanistan (and the region), while others names it as the most import non-security priority.

Even if Doc Brown had taken us to a time before the Obama administration had linked agriculture and security, the two seemed to be already well connected in the 2006 U.S. Army Field Manual 3-24, better known as the counterinsurgency manual. The manual lists key U.S. government organizations whose various works are part of the larger counterinsurgency effort. The U.S. Agency for International Development and the Department of Agriculture are among the organizations listed.  Additionally, the field manual goes on to describe that:

Without a viable economy and employment opportunities, the public is likely to pursue false promises offered by insurgents. Sometimes insurgents foster the conditions keeping the economy stagnant. Insurgencies attempt to exploit a lack of employment or job opportunities to gain active and passive support for their cause and ultimately undermine the government’s legitimacy. Unemployed males of military age may join the insurgency to provide for their families.

Among the potential solutions to this potential problem, the manual suggests engaging populations in one of several various works, including agriculture – thus “[removing] the economic incentive to join the insurgency.”

In the end, Ambassador Holbrooke and Secretary Vilsack fielded questions that explicitly asked about agriculture’s role in security.  A mere half an hour later, and the tune had shifted: “It’s in everyone’s security interest that we promote agriculture in Afghanistan,” said Secretary Vilsack; and agriculture “is critically important, long-term, to security” according to Ambassador Holbrooke. USAID Administrator Rajiv Shah also recognized USAID’s Afghan agricultural programs as part of a larger effort which coordinates U.S. military and multi-agency civilian work with Afghan governmental and civilian efforts—considering “this work as a whole-of-government approach, deeply coordinated against that common strategy.”

Though at first these officials presented apprehensions, with a little coaxing they fell back in line with the wider Obama administration in identifying agriculture as a powerful weapon in America’s counterinsurgency arsenal.