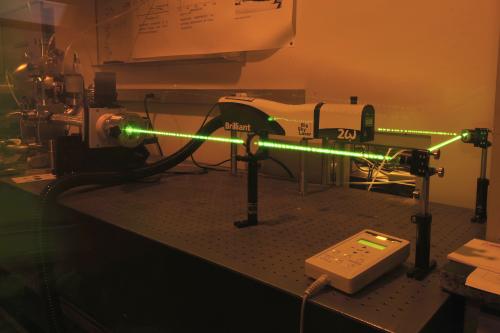 As another leg of my trip to NREL and NORTHCOM a few weeks ago with colleagues Commander Herb Carmen and Will Rogers, we swung by the Air Force Academy to check out their energy work. My biggest take-away may be that they have the largest, best-equipped S&T labs I’ve ever seen at a university. It definitely plucked my nerd heartstrings.

But to get to the real point, here is the Academy’s energy vision (pdf):

The 2008 United States Air Force Academy Energy Strategic Plan details a vision to improve our stewardship of fiscal and natural resources, by becoming a leader in the world of renewable energy and involving the 8,200 cadets, faculty and employees of USAFA. The vision is to be a “Net-Zero” electricity installation by 2015 and a carbon-neutral installation by 2025. These challenging and lofty goals raise the bar for the Department of the Air Force, the Department of Defense and the nation.

Love the linking of energy and climate goals. Notably, they have several key enablers of success at work here: leadership instruction; some motivated individuals; a good partner in their local utility; and funding from the stimulus package. These ingredients have to date added up to their thorough mapping of their alternative energy potential, lots of ongoing research and a solar installation on its way.

The DOD Energy Blogger, himself an Academy grad, described another important aspect of this location back in December thusly:

…tons of potential for cadet learning and culture change. All of which should impact the AF more broadly as the grads move out into leadership positions in the "Real Air Force."

Cheers to that, and while I don’t undermine its importance, I’m thinking that lessons learned they might share from working with a willing utility partner may be even more important for fellow Air Force and DOD installations better meeting energy requirements – something I studied up on about a year back but haven’t been paying as much attention to as of late. If anyone knows of any good research on how different types (or regions) of utilities are or are not integrating renewable, let us know. In the meantime, thumbs up and thanks to the Air Force Academy.

Photo: A 200-milliJoule pulse laser at the U.S. Air Force Academy in Colorado Springs, CO. The laser is used for a variety of experiments, including tests to determine how "pushing" sulfur into a silicon-based solar cell increases the cell's efficiency. Courtesy of Rachel Boettcher and the U.S. Air Force.