Yesterday I made the journey over to the Hill to check out an interesting hearing for the House Armed Services Committee Readiness Subcommittee over energy management and initiatives on military installations. The hearing, overseen by Chairman Solomon Ortiz (D-TX), heard the testimony of four Defense Department officials: Dr. Dorothy Robyn, Deputy Under-Secretary of Defense for Installations and Environment; Mr. L. Jerry Hansen, Army Senior Energy Executive; Mr. Roger M. Natsuhara, Acting Assistant Secretary of the Navy for Installations and Environment; and Mrs. Debra K. Tune, Performing the Duties of Assistant Secretary of the Air Force for Installations, Environment and Logistics. 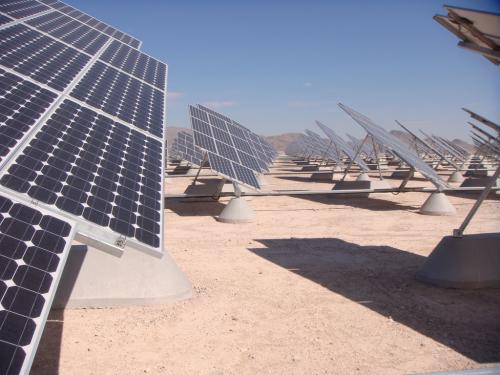 The opening testimonies from the four defense representatives can be accessed here: DOD; Army; Navy and Air Force. The hearing can be viewed here.

Rep. Ortiz started on two colossal renewable energy projects that the military services have undertaken, at Nellis Air Force Base, Nevada and Fort Irwin, California. Despite his evident pride in renewable projects such as this, the initial concern of the hearing was how these and other energy initiatives have the potential to affect DOD operations and readiness negatively. Specifically, he cited the potential for wind farms and solar arrays to disrupt military training and radar, weakening both in-theater and homeland effectiveness.  Each witness named this as a potential concern in their respective testimonies, which prompted Ortiz to inquire as to any established basis of information or study to support these concerns. Dr. Robyn noted that, to her knowledge, no projects have gone forward that have created any such problems.  Natsuhara followed later with a reasonable statement what concerns them most is what is not known about the effects of most projects, but none of the panelists were able to offer any data supporting, or disproving, the concern for radar disruption.

The Congresspeople were also concerned with the pattern each department had followed for their energy initiatives. An apparent football fan, Representative  J. Randy Forbes (R-VA) described such patterns as being much like playing scrimmage games of football: you don’t plan the play like a great college coach, you simply say “just go deep.” Illustrating an attempt to get as much out as you can, as fast as you can.

The event felt notably tense when Representative Gene Taylor (D- MS) shifted focus toward how not embracing energy initiatives can hurt the American people, as he invoked memories of a downed energy grid in Mississippi after Katrina. Taylor described how a military base in Mississippi was able to provide services (e.g., food, energy) to the broken community surrounding it. He claimed that due to the base’s energy independence from the larger public grid it was able to support regions of Mississippi His ominous conclusion to this thought was “there will be other hurricanes.”

Taylor continued with questions about water waste, offering that 10 percent of all fuel used in the field is utilized for water heating, and asking specifically about the implementation of water heat exchangers which could nullify some of the need for that 10 percent. The resulting responses, or rather response (Natsuhara was the only one to give it a whack after an uncomfortable silence), consisted of mentioning a Navy solar desalination project, noting that the Marines are very aggressively trying to push renewable technologies, if they indeed prove to work. Taylor’s response: “They do work sir, I can assure you.”

Though rushed by an impending vote, the hearing proved to be beneficial to all, having highlighting the kinds of complexities inherent in the field of Natural Security – exactly the same complexities which can make it a dynamic, exciting and sometimes frustrating field.