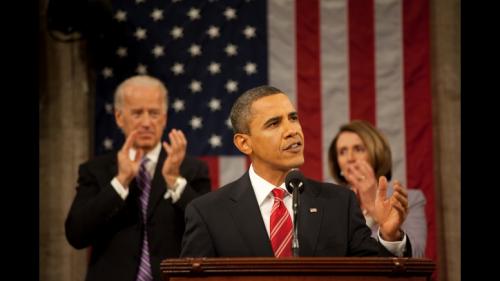 Last night President Obama delivered his first State of the Union address before a joint session of Congress. (A full transcript and video of the speech are available, courtesy of the White House.) While watching last night, I was curious how the president would mention energy and climate change, given that the major theme of last night’s speech, as one would suspect, was the economy.

It was interesting, though not at all unexpected, that the president discussed energy and climate change in the context of creating new jobs and building a clean energy economy. With jobs to top the president’s agenda in 2010, he emphasized that “We should put more Americans to work building clean energy facilities and give rebates to Americans who make their homes more energy-efficient, which supports clean energy jobs.”

“We need to encourage American innovation,” the president said, “And no area is more ripe for such innovation than energy.” President Obama even made the case by highlighting last year’s investments in clean energy: “the North Carolina company that will create 1,200 jobs nationwide helping to make advanced batteries; or in the California business that will put a thousand people to work making solar panels.”  Additional investments to help shore up our independence from foreign oil included “opening new offshore areas for oil and gas development…continued investment in advanced biofuels and clean coal technologies.” President Obama even declared that building a clean energy economy meant “passing a comprehensive energy and climate bill with incentives that will finally make clean energy the profitable kind of energy in America.” This kind of federal investment in energy innovation is important to increasing energy security to be sure, but implementation is going to be key here (see our 2009 workshop report on just that). And much of that implementation will be up to market conditions and individuals that may not be acting in concert with the president’s bold plans.

His support for “building a new generation of safe, clean nuclear power plants in this country” aroused notable applause from his political opposition on the floor. (You’ll recall in a post from July 2009 that Republican Senator Bob Corker, speaking before the Senate Foreign Relations Committee, explicitly emphasized the need to build many, many nuclear plants to combat climate change.) If I could have added a bit more natural security-style spin to the speech, I would not have completely separated discussion of nuclear energy innovation from his later emphasis on nonproliferation and disarmament – though, understandably, that might have been a bit too Atoms-for-Peace-y. The nuclear piece could have provided a nice segue between the economy and security sections, as we find them to be closely interrelated.

What I thought was particularly interesting was that the president highlighted the controversy with the evidence behind global climate change, no doubt in reference to the recent news that the Intergovernmental Panel on Climate Change published inaccurate data and findings on the link between climate change and melting glaciers in its 2007 report.

“I know that there are those who disagree with the overwhelming scientific evidence on climate change,” the president said (emphasis mine):

The only other mention of climate change came during his discussion of the current wars and the future security environment. The president addressed the threats from al Qaeda, prosecuting the wars in Iraq and Afghanistan, “the greatest danger to the American people – the threat of nuclear weapons,” and the threats associated with Iran and North Korea. But toward the end of this section, President Obama said “We have gone from a bystander to a leader in the fight against climate change.” Mentioning climate change in this section, albeit briefly, reiterated his long-held position that climate change is also a national security issue.

President Obama lauded the House for passing a clean energy and climate bill last year, “And this year I'm eager to help advance the bipartisan effort in the Senate,” he said. With this and his commitments to innovation, it will be interesting to see how the administration moves on these issues over the next 12 months.

Photo: President Obama delivers his first State of the Union address. Courtesy of Pete Souza and the White House.