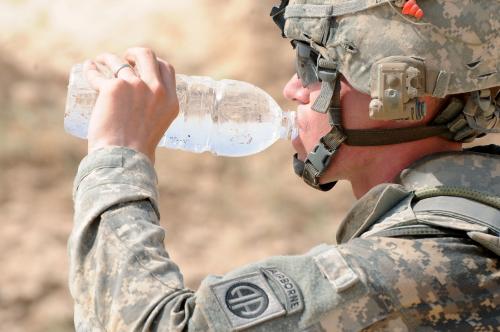 A recent article in the February 20, 2010 National Journal, “The Bottled-Water Problem,” (subscription required) explores the logistical challenges that the U.S. military and NATO troops are experiencing with water, food and fuel supplies in Afghanistan. In particular, the author, Sydney J. Freedberg Jr., focuses on the military’s reliance on importing supplies of bottled-water due, in part, to concerns that contaminated water from indigenous sources is making military personnel sick.

Freedberg explores the question of purifying indigenous sources of water and indeed points out that the U.S. military and NATO are working towards buying local water with potential investments in water purification and bottling plants. But purifying water locally might not be the most cost-effective approach to solving the military’s water supply issue in Afghanistan, at least so suggests a Dutch Air Force officer who coordinates logistics for the International Stability Assistance Force.

The “bottled water we import is cheaper than when we get it here,” the Dutch officer told Freedberg. And that might be true if one were calculating the cost of water using the initial purchase value of water by volume compared to what it would cost to get water locally through investments in water purification and bottling plants. But when it comes to military supplies that are shipped to and within a combat theatre, the value of those supplies is much greater than the price the military originally purchases it for.

Fuel costs, for example, are now being calculated using the “fully burdened cost of fuel,” concept which “is a recognition that there are a lot of other factors that come into play” than just the initial cost at the pump, Mark Iden, the Deputy Director of Operations at the Defense Energy Support Center (DESC), told The Hill in October 2009. These other factors include the force protection required to secure convoys, the logistical costs of transporting it within theatre (for example, transporting fuel bladders via helicopter to remote operating points in Afghanistan) and the loss of life when convoys are ambushed by insurgents using improvised explosive devices along supply routes.

It would be misleading to think that the cost of importing water is insulated from these other factors, given that water constitutes a significant portion of supply convoys. In fact, the Marine Corps has already dispelled this notion. According to Colonel T.C. Moore, the Marine Corps Operational Liaison to the Defense Advanced Research Projects Agency and the team leader for the Marine Corps Energy Assessment Team (MEAT) which was charged by Marine Corps Commandant General James Conway in 2009 to assess the fully burdened cost of delivering essential supplies to Marines in Afghanistan, “hauling water makes up 51 percent of the logistical burden.” In fact, the MEAT calculated that a gallon of water at the tactical edge in Afghanistan costs the military $4.78 (compared to the assured delivery price of $1.42/gallon). According to Colonel Moore, “The Marine Corps should be focused on finding solutions at the tactical edge,” including using indigenous sources of water wherever possible and making investments in more water-efficient technologies at forward operating bases to bring the supply cost down.

General Conway told an audience at the Naval Energy Forum in October 2009 that purifying water in Afghanistan can potentially take 50 trucks per week off the road, which could translate into fewer troops needed for force protection, significant fuel savings from taking those trucks off the road and reducing the military’s vulnerability to attacks against its supply convoys.

What is more, promoting development in Afghanistan has become a priority for General Stanley McChrystal, the U.S. military commander in Afghanistan, and investing in water purification plants can help promote those long-term development priorities by leaving Afghans with usable infrastructure when the U.S. military and NATO troops begin to drawdown and withdrawal altogether.

The bottom line: when it comes to calculating the cost of any supply shipped to and within a combat theatre, it is rarely as cheap as it seems, and water is no exception.

Photo: Spc. Corey Weinheimer hydrates after a joint air operation of the Iraqi Army and Iraqi National Police. Courtesy of Staff Sgt. James Selesnick and the U.S. Department of Defense.