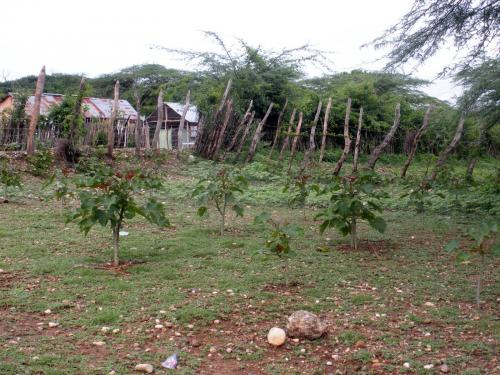 Mounted on the back of a motorcycle, traveling the makeshift dirt roads of Haiti and the Dominican Republic, the efforts of IDDI, CIDEAL, and the EU in collaboration with local agriculturists were in plain sight: thousands of Jatropha curcas plants had matured throughout this mountainous region.

The Jatropha genus consists of approximately 175 species (including Jatropha curcas) from the Euphorbiacea family. The fruit of Jatropha curcas produces an oil that can processed into biodiesel.

As I learned, there are several benefits to using this plant as a source for biofuel. It is a hardy plant that can grow in marginal land and in arid/semi-arid regions. The cultivation of Jatropha curcas does not compete with food production and thus avoids the “corn ethanol syndrome.” It also yields many more times the amount of oil as other sources of biodiesel. The remaining portion of the seed after oil extraction is an excellent organic fertilizer and is being used in Africa and South Asia as a means to restore soil nutrients.

Most important to the Dominicans with whom I worked are the economic benefits provided by this plant. Dominican farmers planted Jatropha (a highly toxic plant for both humans and animals) around tracts of corn, beans, yuca root, and potatoes to resist their consumption by roaming goats and cows. And, with the help of IDDI, these farmers were able to form cooperatives, develop new skills, and utilize a gifted biodiesel factory to locally produce and sell biodiesel and hand soap.

I remember traveling to Las Lagunas village to deliver more than forty-thousand Jatropha curcas plants to more than fifteen of the project’s beneficiaries. Access to the mountaintop village Las Lagunas was strenuous: a steep, narrow path laden with immense boulders. As our two Daihatsu Delta trucks arrived, we were greeted by dozens of eager residents. It was apparent that the community was already aware of the potential economic benefits associated with Jatropha curcas. It was a struggle to prevent the enthusiastic mass from tearing each other down to attain more plants.

I left Las Lagunas inspired. The added income for these families could make the difference between using firewood to cook (exacerbating regional deforestation) and purchasing the more efficient cooking gas. Likewise, the 40,000 Jatropha curcas plants would help rehabilitate deficient soil and restore the region’s carbon-capture capacity. 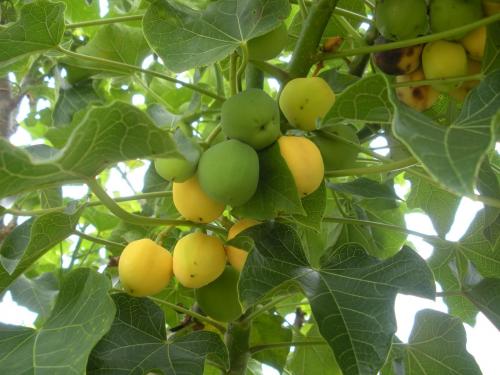 The rural Dominicans I met were grateful for IDDI’s commitment to teach ‘best practices’ to manage local resources and improve environmental quality. Expectations of Jatropha as a global biofuel solution are often lofty. However, serious questions remain regarding the ability of Jatropha curcas to be cultivated on a large, commercial scale. The successes of this project were hardly achieved without an intensive effort: the Dominicans were skeptical and the results sometimes underwhelming. Stay tuned!

In the next post: Life in the border region and the struggles the project faced.

Photos: A parcel of Jatropha Curcas in the Dominican Republic; fruit of a mature Jatropha plant. The fruit is ready for harvest as it approaches a brown color. From the ripe fruit, four seeds can be extracted and processed. Courtesy of Chris Scanzoni.