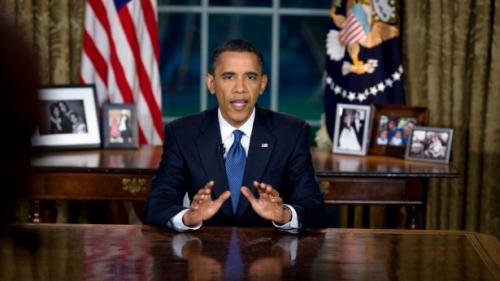 So the plan was that I was going to write on any security angles I perceived in President Obama’s address from the Oval Office on the disaster in the Gulf of Mexico. But the speech left me thinking that it’s most important to focus on the situation at hand, address the crisis, and address the economic damage. This is not because there are no consequences for national security, but rather because – let’s be honest – there is no telling what those consequences are at this point.

It is hard to wrestle with what this disaster means for U.S. national security (only a little less difficult if you define security broadly, as we do). One pal suggested to me a week back that this will affect support for the Navy aircraft carrier fleet (I am not totally sure what the logic there was, but happy to hear your guesses). At a roundtable with Hill members yesterday one woman told me that this disaster heightened her concerns about Cuba feeling emboldened (again, kind of a head scratcher). Perhaps a bit more likely, at our annual conference last week I chatted with a guest who was concerned about BP being bought out by another oil company, which would be a major shift in consolidation when the majority of the world’s oil is governed by national oil companies.

To be fair, there are a few obvious affects. First is the opportunity cost of the president cancelling trips to Indonesia and Australia. Next, according to President Obama’s speech, some of Secretary Ray Mabus’s time is now going to be devoted to Gulf restoration planning. And this does certainly point to the need for a strong Coast Guard.

But really, beyond the obvious and immediate, who knows? This disaster could change everything. But it could also change nothing.

This may be unpopular, but I’m going to contend that no one really has any idea what this is going to mean for our security. It could go in any number of different directions. We’ve been through oil-related crises far more directly attributable to national security and foreign policy interests than this tragedy off our own shores. And yet here we are today.

In my favorite line of the evening (especially as I was not thrilled with the first 10 minutes of the speech – the news is already bombarding us with the statistics; I wanted plans and inspiration, not more statistics) the president declared: “One approach I will not accept is inaction.” I don’t doubt that the administration and Congress will get action from this, but the nature of that action is just an educated guess by anyone at this point. And the real effects to DOD and to security broadly will be directly tied to what form that action takes.

There is a transition in our energy economy on the horizon, but the pace of change and what that transition looks like will depend on details that no one yet knows for sure. It could be smooth and relatively quick. But we could also fail to take all but the most basic steps in the near term. Remember, we raised CAFE standards in the 70s and then soon enough embraced SUVs. I did appreciate that President Obama reminded the American public that we’ve known for decades that the era of easy oil is over, but yet we’ve failed to adjust to that reality.

Almost daily people ask me about the security implications of this oil spill in the Gulf. Until today I was not comfortable with the fact that I didn’t have good answers yet. But after watching and reading so much ill-informed, guesswork commentary and conflation of facts today, I contend that no one else really does either. And that may be a good thing.

Photo: President Obama speaks from the Oval Office on June 15, 2010 about the oil spill in the Gulf. Courtesy of Pete Souza and the White House.