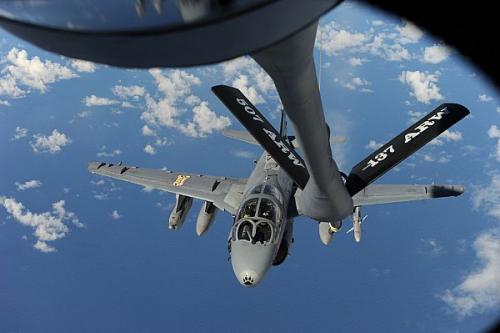 Yesterday The Washington Post reported that US gasoline prices have hit an 8-month low.  The article reports that “the sagging commodity market price for gasoline is good news for American motorists, promising a mild easing in pump prices. It also marks the end of a summer of relative stability for retail gasoline prices, which have fluctuated by about 20 cents per gallon since the beginning of the year and have stayed in an 8-cent range for the past 69 days.”  But the drop in oil prices may ultimately prove to be a bad thing for America’s energy policy, and particularly for the way that DOD shapes its energy strategy.

That’s because the high and volatile price of petroleum serves as a major incentive for DOD to switch to a greater use of alternative fuel sources.  In 2008, according to the US Department of Energy, about 78 percent of DOD’s total fuel use was petroleum. Since DOD is so reliant on petroleum as a fuel source, even small price fluctuations can have major budget effects: for example, in 2008 Defense Secretary Gates said “every time the price of oil goes up by $1 per barrel, it costs us about $130 million, and frankly, my credit card limit is getting narrow on that.”

However, in the process of helping out with the DOD fuels report, I’ve learned that there are several other reasons that it is vital that DOD begin planning and implementing a transition away from a reliance on petroleum energy resources.  Back in June, I attended an event on the future of biofuels, where Rear Admiral Philip Cullom from the Navy Energy Coordination Office referred to the fact that oil cans serve as a “flashpoint” for military intervention.  Furthermore, many major suppliers of petroleum fuel, such as Venezuela and Iran, are not regimes that the US necessarily has an interest in supporting by purchasing fuel from them. As I wrote in my previous post, reserves-to-production ratios show us that the future of oil production will be less focused on US allies like Canada and Mexico that are major suppliers of US oil now, who will run out of petroleum at current rates of production within 20 years, and more focused on Venezuela and Iran, who have much longer production horizons.  Finally, defending fuel convoys on the ground poses a great cost that can be measured in dollars but also (and more importantly) in lives.  Estimates say that there is about one American casualty in Afghanistan for every 24 fuel resupply convoys. Passing these costs on to contractors or local groups can also have a security toll: The New York Times reported in June that a network of warlords in Afghanistan is profiting on the magnitude of millions of dollars from escorting NATO convoys.

Of course, this sets aside the costs that are associated with environmental degradation due to petroleum use.  Yet even here there is a direct connection to US national security interests: for example, Rear Admiral Cullom argued in June that global instability due to the effects of climate change, as well the public health and other environmental repercussions of drilling for oil, could have major security implications.  And the 2010 QDR also acknowledged that climate change could act as an accelerant of conflict worldwide.

Many branches of the military have done an excellent job of beginning to prepare and plan for an energy transition.  The Navy, for example, plans to acquire 50 percent of its energy resources from alternative fuel sources by 2020, and to sail the “Great Green Fleet” by 2016.  But a coordinated strategy throughout DOD would be a much more efficient and effective way of planning for DOD’s future energy needs.

Critics sometimes argue that the US military should not focus so intently on reducing energy consumption, saying that the US military’s job is warfighting, not saving the environment.  But in my time here at CNAS, I’ve learned that often, the two go hand-in-hand.