This line in the Washington Post's article on Lebanon jumped out at Abu Muqawama for obvious reasons.

Sunni supporters of Hariri's Future Movement, allied with the government, closed roads leading to the south and to the Bekaa Valley in the east in retaliation for Hezbollah's closure of the airport road.

That pretty much sums up the tactical realities in Beirut. Hizbollah can take control of the city itself, but M14 and the government can then cut Hizbollah in Beirut off from their strongholds in the South and the Bekaa.

On to other realities, Abu Muqawama didn't mean to imply in an earlier post that Walid Jumblatt was blameless -- just that Hizbollah very wisely pinned all their anger on him rather than on the rest of the government leadership.

And Hizbollah may very well get the government to back down from their positions on both the telecommunications system and, more likely, Wafiq Shoucair. (Although the international community -- and the international business community -- is not going to rest easy on the accusations Hizbollah is spying on flights landing at the airport.) But the fact is, if civil war does break out, Hizbollah is going to get the blame from basically everyone but Syria, Iran, and other Shia worldwide. This is not 2006 and this is not Israel that Hizbollah is staring down. This is 2008 and these are other Lebanese -- Sunni and Druze and Christian. Hizbollah can't count on the support from anyone but a few pariah states, and though Abu Muqawama is not quick to start quoting U.S. government officials in times like these, what Zalmay Khalilzad said yesterday probably sums up what a lot of folks are feeling, that Hezbollah had "made progress in establishing a state within a state. They have not implemented agreements and resolutions with regard to disarming their militia. That in turn is encouraging other groups to rearm as well. There is a lack of progress because of their opposition in terms of the election of a president, although everyone has agreed on Mr. Suleiman."

Hizbollah will claim that's not a fair representation of the realities in Beirut. And Hizbollah -- and the Shia -- have legitimate political greivences within what passes for a political system in Lebanon. But if things continue to go to guns, they will get all the blame for the new civil war because following the last civil war, they were the only group that was allowed to keep their weapons. (Well, they and the Palestinian militants.) Is Hizbollah ready to take on the blame for this in the same way the PLO (unjustly) took all the blame for the last war?

And more importantly, does this mean the Ibn Khaldun conference is cancelled?

Update: Even Robert Fisk can't bring himself to blame America for this one and is distressed by Nasrallah's language aimed at his buddy Walid Jumblatt. Also, as Sean points out, when Hizbollah starts taking over entire neighborhoods and burning the offices of al-Mustaqbal, it's a civil war. And naharnet.com -- always a reliable outlet for following the comings and going of M14 leaders -- reports that Jumblatt has been evacuated from his home in Beirut by the Army and that RPGs are now hitting the Hariri mansion in Qoreitem. Jaysus.

Update II: Bech writes in to ask whether or not Israel or the United States can do anything to help the government forces militarily. The short answer is, no. The longer answer is, sure, they could always intervene directly, but it's hard to think of anyone in either Jerusalem/Tel Aviv or Washington who would have the stomach for such a thing. Abu Muqawama is now reading about the close quarters combat in Hamra/West Beirut -- la guerre des rues as L'Orient-Le Jour describes it. At the end of the day, neither the U.S. nor Israel can fight Amal and Hizbollah on the government's behalf. (Though we're sure that's exactly what M14 would love to have happen.)

Update III: Bech also notes the surprising level of operational cooperation between Amal and Hizbollah. Abu Muqawama doesn't feel he can write much on this since he isn't on the ground to see for himself (unlike Bech), though he too finds this really interesting. Journalist Irina Prentice is on the ground, though, and wrote this in an email with respect to the fighting in Hamra (published with permission, and she notes that despite being on the ground she has an admittedly limited perspective on events given her "(wo)man on the street" position):

A foreign journalist living in Hamra explained that clashes have been ongoing since this morning, and the streets have reportedly come under control of the members of the opposition forces Hezbollah and Amal militia despite ongoing exchange of gunfire being resounding throughout the neighborhood.

Television pictures this morning reveal and predominantly deserted Beirut. Shops are closed, no cars on the street. Damage so far: bullet holes in cars, shattered shop fronts, freshly pockmarked buildings, and some smoke out of Hariri's Moustaqbal Newspaper headquarters.

Reports of dead are varying between 7 and 15, but a tally will probably be difficult to track unless the fighting factions announce the numbers.

The city yesterday was at 60% blocked, making moving between neighborhoods very difficult. The percentage today is rising although there are no firm numbers. Moving between East and West Beirut has become even more difficult as announcement of the sea road being cut off by opposition Amal forces.

Update IV: Tom Perry -- friend to both Londonstani and Abu Muqawama -- is now reporting for Reuters that Hizbollah/Amal has now taken control over most of Beirut. Oh, if only Abu Muqawama had a nickel for every time an M14 sympathizer swore to him this would never happen. A clue for why it happened might be found in all those pictures of gunmen holding their rifles at the hip, cowboy-style. Great shooting positions, boys! (Great shooting position, that is, if your target is the apartment window 12 feet over your enemy's head.) Also, it appears as if the M14 lot are stealing tactics from the Fatah field manuals:

"We entered the neighborhood. They threw away their weapons and ran," said another gunman as one of his colleagues tore down a poster of Hariri. 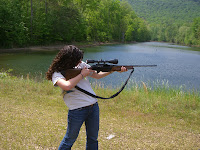 Update V: We now present photographic evidence that Abu Muqawama's girlfriend understands basic rifle marksmanship better than America's allies in the Middle East. Here she is, pictured, with the stock of a .300 win-mag drawn into her shoulder and looking through the sights. That, boys, is how it's done. You might have had better luck defending Hamra if you knew how to hold your freaking rifle, you clowns.