Yesterday an article in the LA Times caught my eye. As if Yemen didn’t have enough to worry about, it now has a good old fashion revolution in the south, with separatists declaring, “Yemen is not our country. South Arabia is our country.” So what does this have to do with Natural Security? In the words of a South Arabian activist “Look around. We have oil and gas and fertile lands and ports.”

In addition to complaints over land and oil, lack of services such as education and infrastructure also top the secessionists’ list of issues with the Yemeni state.

With the majority of known Yemen’s oil located in the South, governmental development of southern oil (and to a lesser extent natural gas) reserves has been a key grievance for South Arabian rebels, who have begun “opposing with manly firmness [Yemen’s] invasions on the rights of the people.” The region’s residents too have taken a similar stance, or so suggests the reported 70 percent of residents looking to secede and their recent kidnapping of Chinese oil workers in the South.

While doing some background work on Yemen, I came across this nifty graph. I don’t think I need to explain just how wide the gap between the world average (per capita) usage of energy and Yemen’s average is; clearly Google has done that for me. 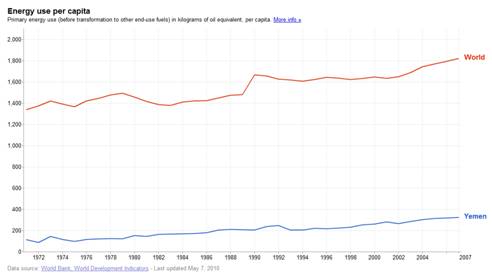 For a state with such low per capita energy usage, you’d think it wouldn’t be such a grave issue. However, its people do have an extraordinarily high economic dependency on energy resources. According to the EIA, “Yemen's economy is heavily dependent on hydrocarbons, which account for 25 percent of GDP, over 70 percent of government revenues, and over 90 percent of foreign exchange earnings.”

Yemen is in a bit of a pickle, to say the least, when dealing with the south now. “Declining oil revenues are weakening the government's ability to provide basic services,” such as the education and infrastructure that the rebels are demanding. The only way, under the government’s current funding model, to increase its capabilities to provide these services, would be to further increase oil production, which would also upset the rebels.

As Yemen becomes increasingly dry (both literally and economically)it may become less able to support its own people, who may continue to emerged as both a threat to itself, via rebellions in both the north and the south, and to the world at large, as we saw with the failed jockstrap jihadist on Christmas above Detroit. In the words of wanted separatist leader Mohamed Tamah, “I think violence is coming.”