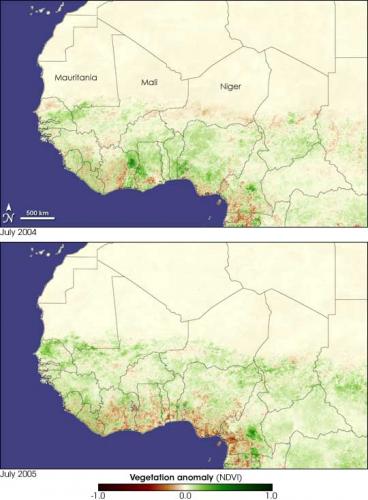 Crop failures during the 2005 food shortage in Niger, as compared to 2004.  This year's crisis is predicted to be worse.

For the past few weeks, the world news has been filled with stories natural disasters affecting the lives of millions: of floods in Pakistan and China, drought and fires in Russia.  Here's another side to the 'fires and floods' story (and another way that climate change could potentially be affecting the lives of millions of people right now): in Niger, NPR reports that protracted droughts and floods are causing food shortages and a building hunger crisis that will affect nearly 8 million people, or about half of the country's total population.  According to a regional spokesman from the UN's World Food Program, "because of failure of crops, because of erratic and late rainfall and the protracted drought, the whole region has been suffering a food crisis... the main reason why the people are suffering is that because of the [typical August] lean season being this year longer than usual — imagine that being protracted for six months instead of three." The UN agency has been coordinating with other international and local aid organizations, as well as Niger's military, to provide emergency food aid.  Despite the government and relief organizations raised concerns about a potential crisis back in November, a lack of funding has rendered the response inadequate to the scope of the problem.  This lack of funds has forced the WFP to make tough decisions: according to the report, "only children younger than 2 and their families will receive protein-rich nutrition distributions from the agency."

This portending crisis should of course be of concern to the US government for moral reasons.  But just as a slow humanitarian response in flood-ravaged Pakistan could ultimately become a security threat to the United States, weakening the central government and allowing insurgent and terrorist groups greater leeway to act, so could famine in Niger prove to be a greater problem for the United States.  The government, installed this February after a military coup, has already failed to protect aid workers from attacks by an Al Qaeda affiliate.  Floods, drought and other natural disasters this August have not only become humanitarian disasters in many cases, they have also caused a marked decrease in government control and security-as, for example, Pakistani citizens have accused their government of being unable or unwilling to act to avert the crisis following massive floods there.  This should make climate change negotiations in Cancun this December-primarily focused around funding for climate mitigation and adaptation measures-all the more urgent.

Next door in Nigeria, UPI reports that Shell, the largest foreign operator in the oil-rich Niger Delta and Nigeria's oil sector, has declared force majeure, meaning that the company will not meet its conctractually obligated production of crude oil through the rest of August and September.  The declaration is designed to allow the company time for repairs on two pipelines in
Cawthorne Channel, Rivers State, in an atmpsophere of rising violence over the past month from the Movement for the Emancipation of the Niger Delta.  The violence, and the announcement, is seen as a blow to Nigeria's late President Umaru Musa Yar'Adua's 2009 amnesty program for militants, which according to the report, "created a positive environment for foreign oil companies to repair damaged production facilities and increase production, resulting in steadily growing output."

The story of the enormous oil leak in the Gulf of Mexico due to the explosion of an oil rig operated by BP was one of the main stories of throughout the summer in the United States.  Yet even in June, The New York Times compared this to the environmental damage in Nigeria's Niger Delta, saying that "perhaps no place on earth has been as battered by oil, experts say, leaving residents here astonished at the nonstop attention paid to the gusher half a world away in the Gulf of Mexico."  According to the Times, the Delta "has endured the equivalent of the Exxon Valdez spill every year for 50 years by some estimates. The oil pours out nearly every week, and some swamps are long since lifeless."  The ongoing environmental damage and violence in the Niger Delta is another side of the BP oil spill story.  It shows that the enviornmental costs to the world's petroleum addiction will affect not just the United States, but much of the world.  It also shows that like natural disasters, oil extraction has destabilizing potential, posing a threat to US national security in yet another way.

Yet another slow DC week in August, with no natural security-related events in sight.  Enjoy the last week of August and have a lazy end to the summer instead!