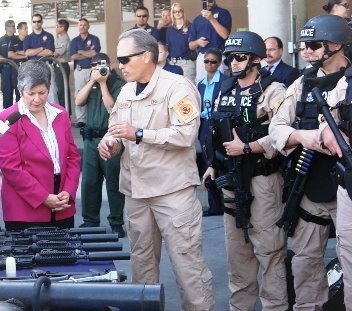 You couldn’t swing a dead polar bear this weekend without hitting hundreds of reports and commentaries about Copenhagen or Climategate, so I’m going to focus my attention elsewhere.

Last week we CNASers gathered around for an informal lunchtime chat, and several of us voiced concern about the recession, lack of confidence in Wall Street, and – my favorite topic of conversation – informal markets. I don’t consider black markets by necessity threatening, wrong, or bad, but at times less-than-legal dealings become large, interesting, and potentially disruptive.

This weekend, The Washington Post reported on just such an event. It turns out that “Drug traffickers employing high-tech drills, miles of rubber hose and a fleet of stolen tanker trucks have siphoned more than $1 billion worth of oil from Mexico's pipelines over the past two years.”

Yep, you read that correctly: $1 billion.

Even better: It seems that oil theft is playing an increasingly important role in the battles between criminal organization Los Zetas and President Calderón:

Oil theft has been a persistent problem for the state-run Petroleos Mexicanos…but the robbery increased sharply after Calderón launched his war against the cartels shortly after taking office in December 2006. The drug war has claimed more than 16,000 lives and has led the cartels, which rely on drug trafficking for most of their revenue, to branch out into other illegal activities.

Authorities said they have traced much of the oil rustling to the Zetas, a criminal organization founded by former military commandos. Although the Zetas initially served as a protection arm of the powerful Gulf cartel, they now call their own shots and dominate criminal enterprise in the oil-rich states of Veracruz and Tamaulipas.

Better still: U.S. oil executives purchased some of this oil; some of them appear to have known that it was stolen by criminal organizations.

The reporters, Steve Fainaru and William Booth, go on to note that in addition to siphoning off oil to sell, the Zetas also command taxes on pipelines within territory they control and work with Pemex employees for assistance. These are good details to keep in mind when debates regarding oil get bogged down in arguing about peak oil and to what degree price inflation in recent years was caused by commodities traders. This news from our neighbor to the south drives home why we security-minded folks need to pay attention to both energy and informal markets broadly. Mexico is our country’s number two oil supplier, and they have serious problems today. To boot, as our pal Seth Myers once reported on this blog, the country’s oil – which accounts for 40% of its government’s revenues – appears to be running out.

The Post has a full feature on its series “Mexico at War,” which I recommend if you feel like digging in deeper on issues with Mexico. Stay tuned also to CNAS’s project on “Crime and Terrorism in the Americas,” currently underway and led by our office’s walking encyclopedia that isn’t Tom Ricks, Colonel Robert Killebrew. And we’ll keep you posted on developments related to Mexico’s resource challenges as they unfold. As for me, I’m off to Mexico on Wednesday, but promise not to purchase any oil while I’m there.