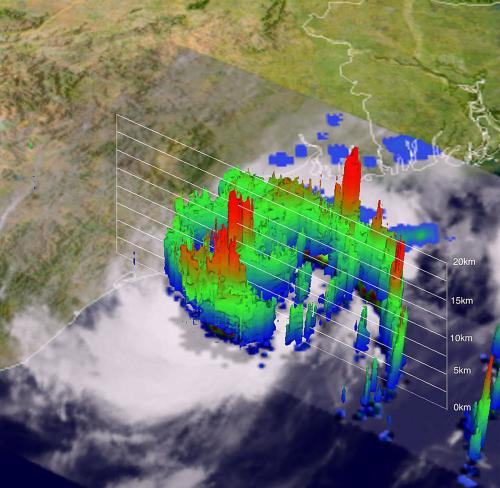 In celebration of the Natural Security Blog’s unofficial Asia Week, we thought it might be interesting to dig through some of the ongoing cooperative programs between the U.S. government and our allies in the East. So without further ado, let’s jump into it.

1: Geologic, Hydrologic, and Geochemical Characterization of the Deep Ground Water Aquifer System In the Bengal Delta of Bangladesh: 2002 - Ongoing

Water, water everywhere, and some's beneath our feet. For Bangladesh, knowing how to properly manage their aquifers has been a vital to the health of their people, as Arsenic has contaminated many of their wells. For example, "The World Health Organization estimates that 40-60 million people are at risk from drinking arsenic-contaminated water in Bangladesh, and that this health risk also extends into West Bengal, India and into southern Nepal."

In an effort to help Bangladesh help itself, and its neighbors, the U.S. Geological Survey has established Bangladeshi public and private partnerships, in addition to enlisting support from USAID and the State Department to offer technical assistance in mapping out the country's complicated aquifers. The heart of their strategy is to determine the full extent of the Arsenic contamination, and locating new sources of clean water for the country.

2: Resource Potential of Algae for Biodiesel Production in APEC Economies: 2009 - 2010

Biofuels have been making a boom in the market, at least sonic booms over at DOD, and their potential as a world energy source seems to only increase as new innovations in algae based biofuels make leaps and bounds. This U.S. partnership project with the Asia-Pacific Economic Cooperation (APEC) seems to have some ambitious goals for an algae fueled future. The project proposal states that it:

Seeks to use a common methodology to assess the potential amount and location of algal biomass in the APEC region that could be suitable for the production of biodiesel. Algal biomass offers the possibility of a sustainable, low GHG emissions feedstock that is widely available, grows rapidly, yields more biofuel per hectare than oil plants, contains no sulfur or other toxic substances, is highly biodegradable; does not involve destruction of natural habitats, and does not compete with food production on agricultural land. Algae could thus contribute significantly to the overall resource potential of biofuels to displace petroleum.

With the project set to wrap up later this year in Novemeber, and having not heard too much in the way of its successes, or failures for that matter, I'm interested to see what kind of headway they've made. If algae indeed proves to be a viable alternative to fossil fuels, offering both a smaller carbon and physical footprint, I might just consider letting my fish tanks go, and pull a Jed Clampett to get my hands on some algae crude, bio-gold, Texas green tea.

Now this is the one I'm probably most excited about. Dynamics in South-West Asia have made for some really interesting bits of noteworthy Natural Security news, especially in the energy sector. With Pakistan battling a multi-front war on water, energy and security, overall stability is a growing concern - a concern which could directly affect the United States as we continue efforts to establish a stable democratic neighbor in Afghanistan.

The Signature Energy Plan would establish, over a 12 month period, six separate energy projects, including:

3. Efficiency improvements at the Muzaffargarh Thermal Power Station, which promise to save $17million a year in fuel usage.

4. Replacement of gas turbines, to save $2.3million per year, at the Guddu Thermal Power Station

6. Close work in electrical loss reduction with four of the nine public electrical companies over the next three years.

While some may be concentrating on the admittedly sexier news about covert U.S. drone strikes in Pakistan, I've been eagerly watching to see where the energy program goes over the next year, since it first broke ground, earlier this year.

For self-defined nerds such as myself, there's nothing quite as cool as a satellite pictures of Earth. For a nerd with a degree in International Studies who is also a member of the Natural Security team, this partnership is almost too much to handle. The Tropical Rain Measuring Mission (TRMM) is part of the U.S. Climate Change Science Program (now U.S. Global Change Research Program), which reaches out across government agencies and also to countries across the world, establishing partnerships in research and innovation in the field of climate science. The TRMM, after launching back in 1997, established an ongoing satellite survey of global weather patterns, namely, as you might have guessed, tropical rain patterns, through a joint effort between NASA and its Japanese counterpart JAXA.

Why is measuring tropical rain from space so important? This is what the actual rocket scientists over at NASA have to say about it:

Responsible for three quarters of the energy that drives the global atmospheric circulation, tropical rainfall can be said to Drive the Climate Machine. Unfortunately, there are still uncertainties of as high as 50% in the amount of tropical rainfall. Unless we can better define the amount of rainfall and the energy released when rain occurs, we stand little chance of putting the climate models through the rigorous tests we need to gain confidence in their predictions.

I'm always impressed when I see just how many government agencies are working in climate change through international cooperation. The Federal Aviation Administration recently released its International Strategies 2010 to 2014 in the Asia Pacific Region. In this strategy, through partnerships with Japan, Korea,  India, China, APEC and other players in Asian politics, the FAA aims to:

While these five are only a small glimpse into the overwhelming variety of partnerships currently being undertaken by the United States government, they illustrate a truly whole of government approach to some really important natural security issues.