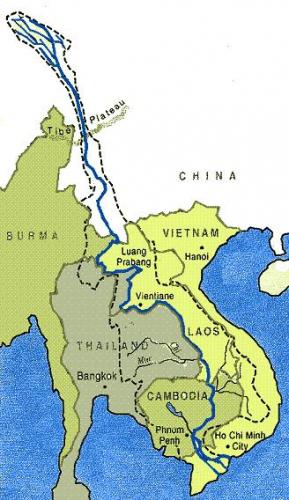 While the historical record shows that no states have ever fought a war over transboundary water resources, such resources have long served as focal points for potential conflict. But despite growing water scarcity in regions of the world – due in part to global population growth and increased drought in those regions – there are still great efforts among states to negotiate and even cooperate over many contentious and increasingly constrained water resources.

Two examples strike me as being particularly relevant to U.S. national security: the Nile Basin Initiative and the Mekong River Commission.  The Nile Basin Initiative (NBI) is a partnership of all 10 Nile Basin riparians to develop the river in a cooperative manner, share the socio-economic benefits, such as hydropower, that the river provides and “promote regional peace and security.”  Similarly the Mekong River Commission, an agreement between Cambodia, Laos, Thailand and Vietnam and with China and Burma as “dialogue partners” but not full participants, is meant to help regional riparians to manage the Mekong River’s shared water resources and develop the economic potential of the river.

Both organizations are good examples of integrated water resource management, a process to manage a river or body of water as a whole to maximize the development potential of an entire river.  Yet both organizations are still missing a crucial piece: that is, the cooperation of the most powerful state in the river basin and the state that has historically been able to control the river’s water resources.

With the Nile, Egypt has had a controlling stake over the river since the signing of the Nile Water Agreement in 1929, which granted Egypt sole access to 55.5 billion cubic meters of water out of the total of 84 billion cubic meters of water that flow through the Nile yearly by forbidding upstream states from building any project that could potentially lessen the volume of water that reaches Egypt.  Thus, while 9 other states lie upstream from Egypt, only Sudan is allowed to access these waters at all.  Despite the cooperation that has occurred over the past decade or so through the NBI, Egypt still refuses to renegotiate the most crucial part of the dispute over the Nile River: that is, who can actually access its waters.

Similarly in the Mekong delta, China is the country that is furthest upstream and therefore able to control the flow of the river completely.  China is currently engaged in or has completed building several dam projects – many hydroelectric ones meant to satisfy a growing energy appetite – which have already begun to slow the river flow and cause environmental damage downstream, including polluting the river with heavy levels of industrial pollution that are present in many of China’s rivers.  The Mekong Commission has raised concerns with China’s over its projects but has received no response from Beijing.

These disputes emphasize the while international rivers and other transboundary water resource may often lead to cooperation among states, true and equitable sharing of water resources still remains a daunting challenge, and could become more difficult as water resource scarcity becomes more acute, driving more states to take a harder line to maintain access to those resources as a vital part of their national security (including a harder line from the more powerful states like Egypt and China).

Yet even as these issue grow in international importance, perhaps more frequently making news headlines, it might seem as though conflict over international rivers will remain an internal security issue for the states that are currently competing with one another for water resources – not affecting U.S. national security at all.  However, I’d argue that it is vital to our long-term U.S. national security interests to promote cooperation and equitable sharing in these major basins and among other transboundary water resources –or at the very least be mindful of where these issues could become flashpoints for conflict.  It is not difficult to imagine a future in which population growth, climate change and other factors lead to conditions of absolute resource scarcity.  Could conditions of absolute scarcity be the straw that breaks the camel’s back in places like Jordan and Israel, causing states to act in their own self-interest to secure access to enough water for their citizens to survive?

Similarly, it is conceivable that under the same condition of absolute scarcity, the other eight Nile riparian states, which have already begun to actively fight back by signing a Nile River treaty that excludes Egypt and Sudan, could engage in conflict with Egypt, an important U.S. ally in the Middle East.  The Tigris-Euphrates river basin is another river that is prone to skirmishing, with Turkey, the upstream state, withdrawing enough water from the river to cause shortages in downstream Syria and even farther downstream in Iraq. (Will recently wrote that water scarcity in Iraq has the potential to undermine the U.S. war effort there.)

Finally, China’s behavior in the Mekong, as well as its claims of sovereignty over the South China Sea, for example, may indicate a bigger picture strategy around the global commons that challenges growing international norms and could pose a threat to U.S. national security interests in the future.

The United States has started in a limited way to offer its technical and management expertise in these river basins and around other water resources.  For example, the Mekong River Commission signed a Memorandum of Understanding with the Mississippi River Alliance in 1995 concerning cooperation in integrated transboundary river basin management.  Yet in order to avoid escalating conflict between riparians, the United States should do more, including potentially interceding as a negotiator, to promote cooperation over and equitable sharing of important international rivers and water resources.

Photo: Map of the Mekong River. Courtesy of Wikimedia Commons.