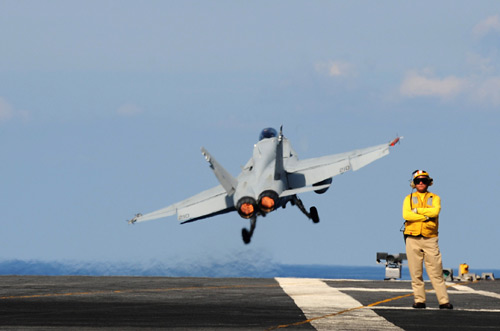 This weekend, thanks to our Senior Military Fellow Commander Herb Carmen, we were privileged to visit the Nimitz-class USS Harry S. Truman aircraft carrier that houses more than 5,000 servicemen and –women with an embarked air wing, along with several CNAS colleagues. We came aboard the Truman during carrier qualifications, and watching many hours of catapult launches and arrested landings was important in our considerations of Navy energy use.

The Truman herself is a remarkable model for energy independence, with two nuclear reactors powering most functions. However, the aircraft for the carrier (tactical aircraft include F/A-18 Hornets, EA-6B Prowlers, E-2C Hawkeyes, SH-60 Seahawks, and C-2A Greyhounds) still require millions of gallons of JP-5 in order for the HST to complete its missions. This year, Secretary of the Navy Ray Mabus has announced plans for a carrier strike group that uses only alternative fuels, to be ready to deploy by 2016. The Navy has already started to test biofuel in the F/A-18, dubbing it the "Green Hornet."  According to the Federation of American Scientists, the F/A-18 E/F Super Hornet has already had significant structural changes in its three drop tanks from the F/A-18 C Hornet, increasing the internal fuel capacity by approximately 33 percent (from 330 gallons per tank to 480 gallons per tank). This improvement extended the Super Hornet's mission radius by 40 percent (from 369 nautical miles, to 520 nautical miles). Now the Navy is aiming to improve the Hornet's fuel efficiency by 3 percent, potentially saving up to 127,000 barrels of fuel per year across the Hornet fleet. (Note: this final statistic has been updated.)

Much of our ongoing work involves energy and resource use, with a heavy focus on military consumption and how that can create operational and strategic risks. Our energy options basically come down to changing what we use (such as biofuels for Hornets) and changing how we use it (such as improving energy efficiency). In weighing specific policies with regard to each option, there are no research-equivalent replacements for trips like these. While much of the detail one needs for policy work (budget details, acquisition process specifics, etc.) can be readily obtained here in D.C., we need to see the aircraft, vehicles, and equipment firsthand, watch how they are used, and speak with people who use them in order to fully understand the implications of our recommendations.

Most of our conversations about processes and how the HST’s sailors and officers do their jobs had little or nothing to do with energy, but many of the big-picture points apply more often than not. One of the most striking take-aways from this trip for us is a better grasp on the nature of change for the Navy. Some of the greatest innovation seems to come from the grassroots level, as individuals and departments adjust to improve how they operate. The HST’s crew also provided us with many stories of their experiences in adapting to more top-down policy decisions – for example when their equipment is upgraded or changed – which served as a great reminder that many ideas that appear to be perfect solutions to great problems on paper come with major implementation challenges. Such challenges can usually be overcome (and indeed, we saw nothing but exuberance for the problem-solving nature of the jobs of the people we spoke with), but it is also helpful to understand and consider implementation in the early process of formulating policy recommendations. Speaking with the implementers is the best way to do so.

We will work more of our lessons learned from this trip into several upcoming reports and policy briefs on natural security issues. For now, we send our gratitude to all those serving the country aboard the USS Harry S. Truman, and especially those who took time out of their days to share their knowledge with us.