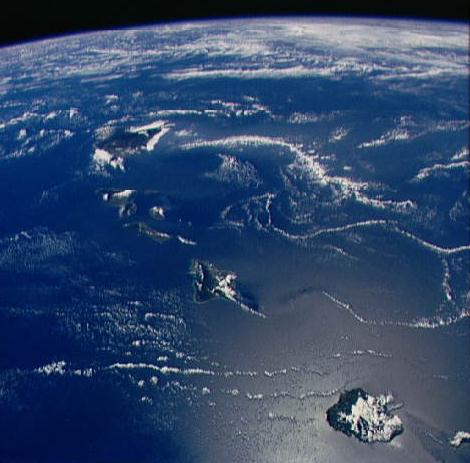 When we travel, we like to compare what we learn about the effects of climate change to a great report on regional effects that the U.S. Global Change Research Program (USGCRP) issued earlier this year. Two weeks ago, Sharon and I traveled to Hawaii to conduct interviews and meet with representatives of PACOM and the military services in support of two of our ongoing projects, so I checked out the projected regional effects for Hawaii in preparation for a blog post on just that.

For the record, the report indicates that the Pacific Islands have already witnessed increases in average temperatures and sea levels for decades, and likely future changes in store for Hawaii include rising ocean surface temperatures, more heavy downpours and alterations in the timing of its rainiest seasons. But I didn’t speak much to people about their thoughts on these or other climate projections; the concerns of many of those I spoke with were a bit different.

Beyond just climate change, many who work on environmental issues or are charged with certain environment-related work for the U.S. military seem far more focused on sustainability broadly – for all natural resources and in the face of a changing world climate. Most individuals I spoke with about energy also spoke of water concerns. Almost everyone we met with knew the story of how Hawaii became highly petroleum dependent (it used to use biofuels for electricity before its sugarcane industry faded) and how that story related to land use and agricultural production. This holistic view stems from Hawaii’s status of being so, well, islanded. Its vulnerabilities run deep and are comprehensive, and this seems to have had the effect of promoting an equally comprehensive view of how susceptible their environment is.

Hawaii is very, very far from anything, which presents a logistical challenge for anything that isn’t produced on the islands themselves. The state relies on imported petroleum for 75% of its electricity and for over 90% of its total energy consumption. With no pipelines, its petroleum is reliant on sea transit. Hawaiians are quick to feel oil price spikes for these reasons, but their food, fresh water, and materials supplies are susceptible as well. For example, the state imports about 85% of its food supplies. The U.S. military presence on the islands constitutes the largest single energy customer, and as our conversations proved, the services are cognizant of the resource vulnerabilities they and the broader community face. PACOM established the Energy Partnership and Strategy Council (PEPSC) in January 2009 to coordinate energy initiatives with state and local officials, and it released a strategy document (pdf) just a few weeks ago. While the largest focus is on this one resource, most energy-focused individuals indicated that they think about all resource concerns in their decision making. For example, one Navy official had considered whether there was a greater need to line some roofs with solar panels or to create “green” roofs efficient at collecting rainwater for food production.

The USGCRP is still worth a glance for background before heading to the islands, and the climate change effects it presents for many Pacific islands within PACOM’s area of responsibility are concerns. But this trip was a good lesson in remembering that projections of future effects must be related to current environmental, geographic, security and economic trends as well.