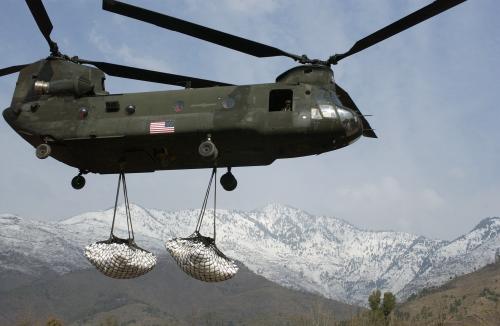 “When it comes to the stability of one of the world's most volatile regions, it's the fate of the Himalayan glaciers that should be keeping us awake at night,” warns Stephan Faris in Foreign Policy, on the specter of Pakistan unraveling as natural resource consumption and climate change take their toll on this withering nuclear club member.

The Himalayan glaciers are the primary source of the Indus River and its six tributaries that flow through Kashmir to form freshwater supplies for millions of Indians and Pakistanis. To date, Pakistan and India have amicably governed the shared Indus waters under the 1960 Indus Water Treaty, which established a governing body – the Permanent Indus Basin Commission – to adjudicate grievances associated with water management between the two rival states. For many, governing the Indus waters has been a hallmark example of how resource issues can act as an opportunity for peace and engagement rather than as the basis for conflict. But, as Faris writes, “the treaty's success depends on the maintenance of a status quo that will be disrupted as the world warms.”

In fact, the Intergovernmental Panel on Climate Change has warned that the Himalayan glaciers could be nearly gone by 2035, leaving Pakistan, where “water is already undermining Pakistan's stability,” in a terribly precarious state. As Faris predicts:

Pakistan—unstable, facing dramatic drops in water supplies, caged in by India's vastly superior conventional forces—will be forced to make one of three choices. It can let its people starve. It can cooperate with India in building dams and reservoirs, handing over control of its waters to the country it regards as the enemy. Or it can ramp up support for the insurgency, gambling that violence can bleed India's resolve without degenerating into full-fledged war.

But while Faris worries about the looming possibility of conflict that could erupt between Pakistan and India, for the United States, the greater concern should be what will happen internally.

While no one can definitively predict what might happen in Pakistan as the glaciers melt and if the state is presented with critical water shortages, it takes little imagination for one to see the possibility of state failure. If history is any indicator, water has long been a political issue and source of domestic grievance and instability in Pakistan – in 2001, for instance, a severe drought prompted riots in Karachi. Meanwhile, water shortages have regularly caused grain shortfalls and provoked food riots throughout Pakistan – in some case requiring the assistance of the military to protect grain stocks. “The water crisis threatens the very unity of the country,” Mohammed Pahanwar, a Pakistani irrigation expert, told U.S. Water News in July 2001.

According to Foreign Policy’s 2009 Failed States Index, Pakistan, ranked tenth on the index, is already on the brink of failed state status, and an irreversible water crisis will likely exacerbate existing tensions and could be the tipping point. But what does that mean for U.S. national security?

Stability in Pakistan is a sine qua non for any successful American military campaign in Afghanistan. In recent months Taliban militants have crossed into the ungoverned spaces of the tribal regions of Pakistan and used the region as safe haven, just as more U.S. troops deploy to Afghanistan to fight the Taliban’s resurgence. Without stability, the Pakistani government – which is already hard-pressed to counter the insurgency in its western territories – would be limited in its legitimacy and ability to provide support to the U.S. military, let alone counter the Taliban insurgency that could very well spread across the state.

Ensuring stability in Pakistan is also crucial for sustaining U.S. military operations in Afghanistan. Since September 2001, Pakistan has allowed the U.S. military to use the country as a staging ground for multinational troops. But recently, as a consequence of the spiraling violence and instability in the tribal areas, military supply convoys have been attacked by Taliban militants, raiding and destroying food, fuel and other supplies in transit to American and NATO troops.

Nevertheless, for the U.S. government, stability in Pakistan must be an absolute. As such, it needs to be cognizant of the role that natural security issues, such as access to water in Pakistan, will play in both near- and long-term U.S. national security strategy in the region.

Photo: A U.S. Army Chinook provides humanitarian relief in Pakistan during Operation LIFELINE, in response to a devastating earthquake that shook the region in October 2005. Since 2001, Pakistan has increasingly become a strategic location for the U.S. military. Courtesy of 1LT Chad Leisenring and the U.S. Department of Defense.