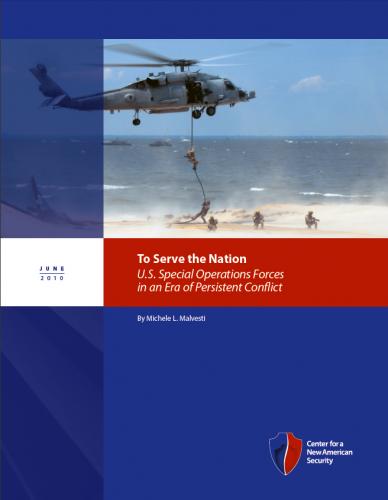 In recognition of the new, thought provoking CNAS publications released yesterday ahead of our Fourth Annual Conference, the Natural Security team will be analyzing our colleagues’ work this week on the blog, providing, of course, a Natural Security spin on the reports. Today’s featured report: To Serve the Nation: U.S. Special Operations Forces in an Era of Persistent Conflict, by Michele L. Malvesti.

“[Special Operations Forces] are in the midst of a resurgence, with their core capabilities aligning with the irregular and potentially catastrophic security threats of today’s geostrategic environment,” writes Michele L. Malvesti in her recent report, To Serve the Nation: U.S. Special Operations Forces in an Era of Persistent Conflict.

When it comes to Natural Security, it may not be obvious how natural resources issues and climate change engage Special Operations Forces (SOF), their interests and core capabilities. But as Malvesti points out in her report, “U.S. Special Operation Forces are ideally suited to help protect and advance U.S. security interests in an increasingly complex geostrategic environment,” including, perhaps, the complex challenges associated with climate change and natural resource issues.

Take climate change in particular. We have reported here on the blog before that SOF already play a role in responding to humanitarian crises in the wake of severe natural disasters, such as tropical storms. In fact, in a previous post here, I shared a Defense Department photo of U.S. Navy SEALs providing humanitarian relief to Filipinos in the aftermath of Tropical Storm Ketsana that left nearly a half-million displaced in the Philippines last September.

Malvesti cites in her endnotes (number 27) the responsibilities and activities of SOF under Section 167 of Title 10, U.S. Code, which “directs the U.S. Special Operations Command to be responsible for the following activities as they relate to special operations: (1) direct action, (2) strategic reconnaissance, (3) unconventional warfare, (4) foreign internal defense, (5) civil affairs, (6) psychological operations, (7) counterterrorism, (8) humanitarian assistance, (9) theater search and rescue, and (10) other activities such as may be specified by the president or the secretary of defense.” (Emphasis added)

Current observations suggest that climate change could make weather events such as storms, hurricanes and typhoons more frequent and potentially more severe. And while SOF won’t be deployed to combat climate change, per se, it is important to note that give their unique capabilities, roles and responsibilities (especially those bolded above), SOF could be deployed more frequently to provide relief in the wake of such events, especially to countries of strategic importance where maintaining internal stability is crucial (such as the case of the Philippines).

The story is a bit different when one considers the influence of natural resource issues broadly. In her report, Malvesti explores several characteristics of the global security environment that have direct implications for SOF with equally important natural security consequences, as well. “Asymmetric and irregular forms of conflict and warfare are eclipsing conventional confrontations between nation-state militaries and have come to dominate the post-Cold War era security environment,” writes Malvesti. In fact:

Accompanying this trend is a shift from interstate to intrastate conflicts and the security challenges that emanate from within weak, fragile, and failing states. Such states can produce and exacerbate humanitarian emergencies that may call for external intervention, and they can serve as breeding and recruiting grounds, transit points, and sanctuaries for insurgents, terrorists, and other violent sub-national actors.

As we have noted in our work, access to renewable and nonrenewable resources shape economic development and the internal security dynamic of many states, including states where SOF are deployed. As Christine and I note in our recent report, Sustaining Security: How Natural Resources Influence National Security, in states or regions where SOF are deployed and confronting asymmetric and irregular forms of conflict and warfare – be it Afghanistan, Pakistan, Somalia and Yemen – natural security challenges are directly linked to internal stability, regional dynamics and U.S. security and foreign policy interests, and may actually make it more difficult for SOF to complete their missions.

Take Yemen, for example. One need only look here to see a case and point where the future security environment will likely be shaped by its natural environment. Indeed, we’ve noted many times here on the blog the importance of oil and water in Yemen, for instance, which is one of the most water scarce countries in the world and one that relies on its increasingly shrinking oil production to subsidize otherwise expensive water extraction. Yemen is also a state where SOF are deployed to primarily provide security force assistance to the Yemeni Army to help thwart the resurgence of al Qaeda in the region. But efforts to stabilize an already precarious state could be undermined as the country’s natural resources become increasingly scarce, exacerbate indigenous grievances and create the conditions of want that could breed violent extremism.

In general, competition over natural resources could affect SOF missions as populations continue to grow and consume finite resources. As Malvesti writes in her report:

Changing demographics also are affecting international security. Over the next decade and a half, the world population is likely to reach eight billion…The majority of population expansion is projected to occur in developing countries that will struggle to accommodate the broad social, economic, and environmental strains likely to accompany this growth.

Growing populations are likely to have expectations for access to resources to sustain their livelihoods, including potable water, arable land, fish stocks, biodiversity, energy, minerals and other renewable and nonrenewable resources. As these resources become increasingly constrained, economic opportunities could be squeezed, affecting millions of people expecting the ability to sustain their wellbeing. As Malvesti notes, “This could lead to a frustrated and disaffected population segment that is ripe for strife or exploitation by others,” with direct consequences for SOF.

Now while natural resources and climate change could affect SOF missions and capabilities, it is important to note, as Malvesti points out, that “Simply because SOF can do just about anything does not mean they should do everything.” So as the U.S. national security establishment adapts to a changing global security environment, policymakers and leaders will have to decide where to dedicate resources to respond to crises and challenges, keeping climate change and other natural resource challenges in mind as they make their decisions.