Welcome back from a long weekend everyone. This week on the blog we're going to hear from a talented student I met last winter who spent his summer in Dominican Republic and Haiti as part of a project to get the local jatropha economy running. In the past few years we've read a lot about this plant as a biofuel option; we've also been exploring more and more the concept of local, distributed biofuel production as a means of creating local business and perhaps procuring fuel closer to where DOD operates in some cases. The lessons Chris will share this week from his experience are quite insightful - we hope you think so too.

Chris, the blog is yours: 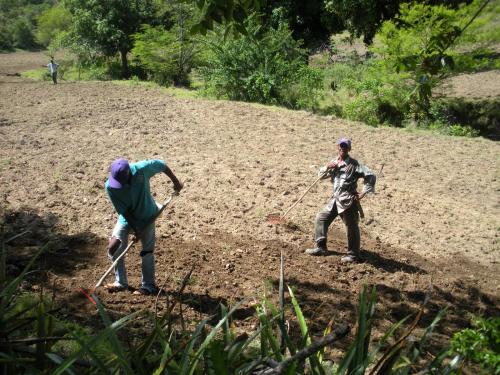 Before I expound on my summer experiences in the Dominican Republic and Haiti, I would like to introduce myself. My name is Chris Scanzoni, and I am an undergraduate student at the University of North Carolina at Chapel Hill studying International Environmental Public Policy Analysis. My research interests include environmental change and degradation; natural resource scarcity; natural and structural water shortage; the merits and shortcomings of international development; and the consequent global security implications.

I was introduced to the Center for a New American Security last spring as I helped to coordinate the 2010 National Defense and Diplomacy Conference with the Roosevelt Institute. CNAS Fellow Christine Parthemore delivered an introductory presentation on the most pressing security threats posed by natural resources. Parthemore’s dynamic world tour of major oil exporters, biofuel producers, mineral deposits-holders, and climate change victims provided all conference attendees with a consciousness reflecting the urgency and gravity of these new threats. As I frantically attempted to reproduce every one of Parthemore’s words to written form, I recognized that the general unknowingness by the American people of these issues was a threat in itself: unless active minds begin to engage these issues on a thoughtful and more public level, American policy-makers may never grasp the demands of a new geopolitical landscape.

In early spring, I accepted an 11-week summer internship with the Institute for Integral Dominican Development (IDDI, translated from Spanish) in the Dominican Republic along the border with Haiti. The binational development project was a collaborative effort by the European Union(EU), CIDEAL, and IDDI focused on local economic development through reforestation. It was not too long ago that the Dominican Republic suffered under the same breed of economic ruin and irresponsible governance as its neighbor. A more effective central Dominican government over recent years has propelled the nation to a position among the most economically successful in Latin America.

Unfortunately, this progress is endangered by massive environmental contamination. Likewise, the warming of the island’s climate jeopardizes agricultural production - the main source of income for many Dominicans and Haitians. Recognizing the grave threats to both nations’ economies and to political stability throughout the Caribbean due to the over-utilization of the island’s forests, increased erosion, and depressed soil quality, I felt compelled to assist the missions of IDDI and the EU. IDDI and the EU coordinated the regional cultivation of hundreds of thousands of Jatropha Curcas (in Spanish, Piñón de Leche) plants.

For me, the next 11 weeks would be typified by extensive (and exhausting) involvement in agricultural and manual labor; positive conversations with grateful Dominican and Haitian farmers; an acknowledgment that international development projects - no matter how ostensibly flawless - are always imperfect; and a persisting hope that this development model could be adopted and replicated by the United States as a means of securing global stability in all regions afflicted by resource mismanagement. Over the next few days, I will be sharing a few insights about using energy projects for local development; I hope readers enjoy!

In the next post: What is Jatropha Curcas? Is this the solution? I take a look at both my experiences with and several outside opinions on the efficaciousness of Jatropha.