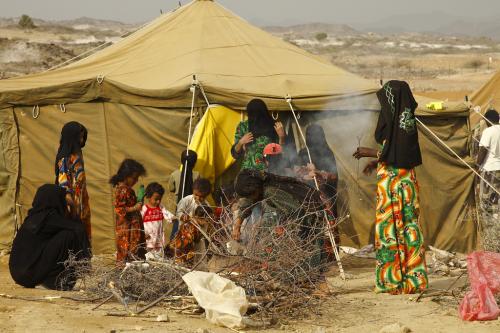 Could aid dependency undermine efforts to bring stability to Yemen? Amid growing instability associated with acute water scarcity, dwindling oil revenue, continued calls for secession from the South, and conflict in the North between al-Houthi-led militias and government soldiers, many Yemenis – at least 175,000 – have been internally displaced and taken refuge in temporary camps where they may find a modicum of relief with access to food, water, and other aid rations. And given the government’s inability to provide, in many cases, the most basic public services, many of the displaced people are not looking to go home – at least any time soon.

In Yemen, unsustainable natural resource management and agricultural practices and a dependence on oil revenue to sustain otherwise expensive water extraction may be precursors to more extensive environmental collapse that could undermine Yemen’s economic development and stability if the government does not improve its environmental stewardship. Already these issues have led, in part, to low-level conflict and left many Yemenis without access to food, water, and other vital resources to sustain their own livelihoods. These dynamics are part of what’s driven many Yemenis from their homes to internally displaced person (IDP) camps.

While United Nations and other NGO IDP camps are constrained by funding and limited to what they can provide, they generally have the capacity to provide basic services that, in many parts of the country, are left wanting (access to fresh water, for example). Other regional actors with larger coffers, however, are providing more extensive relief, which could have an amplified effect on aid dependency in Yemen.

According to a report from IRIN, one IDP camp, al-Mazraq II, “benefits from the deep pockets of the United Arab Emirates (UAE) Red Crescent Society acting on the instructions of UAE President Khalifa Bin Zayed, whose forebears came from Yemen.” The flush funding from the UAE Red Crescent Society has brought up the standard of living for many of the camp’s residents, providing Yemenis with regular access to rice, meat, water, and – believe it – a fan for their tents. “Every family receives three fresh meals a day, plus school-feeding rations for their children attending classes in the camp’s school,” the camp supervisor told IRIN.

With services such as these, many IDPs have no reason to go home. “Living in this camp is even much better than living at home where there is no electricity and other services,” one camp resident told IRIN. “At home, we go on foot for several kilometres to get water from the nearest source.”

It’s clear that the government’s inability to provide basic services, such as access to food and water, is exacerbating the country’s stability and the government’s own illegitimacy. Without basic services, the government will continue to have difficulty in garnering the credibility it needs to stabilize the country and reign in many of its ungoverned spaces. What’s more, a growing dependency on aid could undermine any chance at reconciliation – not just between the feuding parties, but the IDPs and the government as well. Those in the IDP camps may not have an incentive to leave the camps, especially if they cannot be convinced that when they do the government will be able (or willing) to provide the same level of services.

For the United States, this could be particularly troublesome given that the fractured environment in Yemen could exacerbate the threat of transnational terrorism. “In Yemen, we have seen an increase in the prominence of al-Qaeda as it exploits the country’s security, economic, and social challenges,” said General David Petraeus in his testimony before the Senate Armed Services Committee in March.

Yemen is likely to be a state that will remain strategically important for the United States. Should the United States begin to develop a whole-of-government approach in an effort to bring stability to Yemen, U.S. leaders will need to sculpt a development strategy that minimizes dependency on aid and builds resilience and fosters capacity for the Yemeni people and government to provide services and bring some reconciliation to the fractured state.