A hobby of mine is to examine and reflect upon the ridiculous amount of money the military-industrial complex spends on advertising in the DC metro system in its effort to convince congressmen and bureaucrats to buy all the crap it sells. My rugby team practices on a field close to the Capitol South station, and for the past few months, I have passed this series of advertisements for Northrop Grumman trying to sell, uh, something to do with ISR. I'm not really sure what it's all about, but some of the advertisements highlight remotely piloted aircraft. This one advertisement, though, kinda sickens me. I am, like, 98% sure this is a picture of the southern suburbs of Beirut during or immediately after the July War of 2006. Whether or not Israel needed to bomb the southern suburbs during the campaign is up for debate, and I am sure you can make a strong case for Israel's decision to do so based upon the amount of Hizballah infrastructure in what is commonly referred to as "the Dahiyeh". (Which is the Arabic word for "suburb" but has the same societal connotations in Beirut that the French word "banlieue" has in the context of Paris -- no one from the northern suburbs of Beirut, for example, would ever say they live in the "dahiyeh.") Anyway, my point is, should we really be crowing about the destruction of civilian infrastructure during wartime, even when it's within the parameters of international legal conventions? Should the destruction of civilian infrastructure -- civilian housing, civilian businesses, etc. -- really be something we should be slapping each other's backs about, even when the military necessity of such operations is 100% clear? I think you all know the answer is no. And I'm not trying to get all Frantz Fanon on the readership, but if this was, say, a picture of some bombed out city in western Europe after the Second World War, we sure as hell wouldn't be giving each other this kind of collective high-five. ("Woo-hoo! We %$#@ed up Dresden! Hoo-ray, us!") But because this is a neighborhood populated by Shia Muslim Arabs it's somehow okay for Northrop Grumman to take pride in its destruction. Gross. 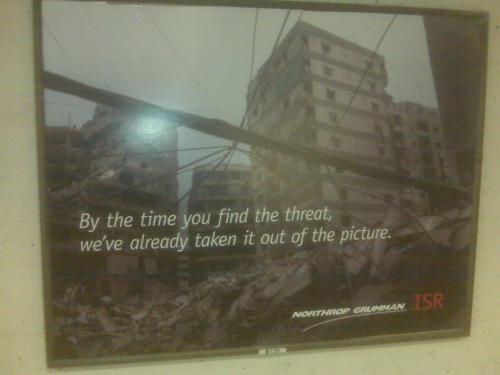