The hearse escort party at Kim Jong-Il’s funeral was once used to assess the political future of North Korea, its composition scrutinized for indications of whether Pyongyang would become more open to reform or move to double down on hardline policies. However, as of yesterday, and about 2 years to the day since the funeral, 5 out of the 7 officials (not including Kim Jong-Un) in that party have been removed from power. The latest is none other than Jang Song-Thaek,  Kim Jong-Un’s uncle by marriage, a figure who was long considered the regime’s ”kingmaker” and who purportedly urged pragmatism on his nephew’s economic and foreign policies. This events marks not only the second time the man has reportedly fallen from grace (or more depending on the source), but also bucks the perception about the hearse escort party with its trend of dismissals, demotions and possible deaths. Find below a simple breakdown: 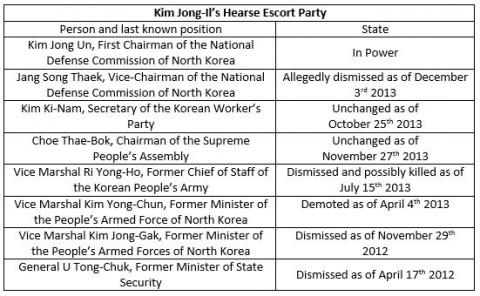 What does this mean? At least for the time being, a flurry of assessments on North Korea’s future that will be both difficult to prove and verify. In the coming days, considerable speculation will be made by DPRK-watchers over what influence this latest dismissal has on everything from regime integrity to military, economic and foreign policy. However, a word of warning to all: time and again the practice has proven to be as hazardous as being a member of the North Korea elite, fraught with considerable risk due to a serious deficiency in credible intelligence. In fact, the above example highlights this weakness.

What this latest event should teach is not what the regime may or may not become, but rather, what we don't know. As mentioned earlier, Jang Song-Thaek was reported to have either been demoted or dismissed several times in the last couple of years, causing stirs then as well. This deepens the danger of current overreliance on speculation over facts that fuels debate on North Korea. Rather than divining from limited knowledge, let’s use this as an opportunity to look at constructive and creative ways to crack the North Korean ‘Black Box,’ as described by Dr. Kurt Campbell, in order to work towards the ultimate goal of retaking the initiative and engaging the North Korean security issue.