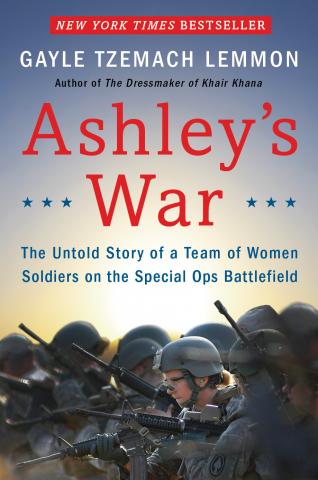 The Center for a New American Security (CNAS) invites you to attend a book launch for New York Times bestseller Ashley's War: The Untold Story of a Team of Women Soldiers on the Special Ops Battlefield by Gayle Tzemach Lemmon, on Tuesday, May 19, from 5:00 p.m. to 7:30 p.m.

Following an introduction from CNAS CEO Michèle Flournoy, Ms. Lemmon will make remarks regarding the Ashley's War, and the broader subject of women in the U.S. military.  Following her remarks, Ms. Lemmon will join a panel of three distinguished U.S. Army officers* with combat experience in Iraq and Afghanistan, including experience in conventional and special operations units: LTC Jason Dempsey, PhD, LTC Jason Amerine, and MAJ Tia Terry. CNAS Senior Fellow Phillip Carter will moderate the panel discussion. Ashley's War will be available for purchase at the event, with Ms. Lemmon signing copies after the panel discussion.

About the Book
In 2010, the U.S. Army Special Operations Command launched a pilot program to put women on the battlefield alongside Green Berets, Army Rangers and Navy SEALs on sensitive nighttime missions in Afghanistan. The idea was that women could access places and people that had remained out of reach, and could build relationships—woman to woman—in ways that male soldiers in a conservative, traditional country could not.  Though they remained officially banned from combat, female soldiers could be “attached” to different teams, and for the first time, women throughout the Army, National Guard and Reserves heard the call to try out for this special ops program that would show them the kind of combat seen by less than five percent of the entire U.S. military.

Each had her own story, her own reason for wanting to, as the recruiting poster advertised, “be part of history,” serving alongside America’s finest fighters.

In Ashley's War, Gayle Tzemach Lemmon uses on-the-ground reporting and a finely tuned understanding of the complexities of war to tell the story of CST-2, a unit of women hand-picked from the Army, and the remarkable hero at its heart: 1st Lt. Ashley White, who would become the first Cultural Support Team member killed in action and honored on the Army Special Operations Memorial Wall of Honor alongside the men of Ranger Regiment with whom she died on mission.  She would also become the first female to be remembered on the National Infantry Museum's Memorial Walk, though women still today cannot officially serve in the infantry.

Transporting readers into this little-known world  of fierce women bound together by valor, danger, and the desire to serve, Ashley’s War is a riveting combat narrative and a testament to the unbreakable bonds born of war.

Ashley's War: The Untold Story of a Team of Women Soldiers on the Special Ops Battlefield will be on sale before and after the event. Ms. Lemmon will be available to sign copies after the discussion from 7:00 p.m. to 7:30 pm.

About the Author:
Gayle Tzemach Lemmon is a Senior Fellow at the Council on Foreign Relations and a contributor to the Atlantic’s Defense One writing on national security and foreign policy issues. In 2004 she left ABC News to earn her MBA at Harvard, where she began writing about women entrepreneurs in conflict and postconflict zones, including Afghanistan, Bosnia, and Rwanda. She is the bestselling author of The Dressmaker of Khair Khana and has written for Newsweek, the Financial Times, the International Herald Tribune, the Christian Science Monitor, CNN.com, and the Daily Beast, as well as for the World Bank and the Harvard Business School. Her 2011 TED Talk was a TED Talk of the Day in January 2012.  A Fulbright scholar and Robert Bosch fellow, Gayle speaks Spanish, German, French and is conversant in Farsi.