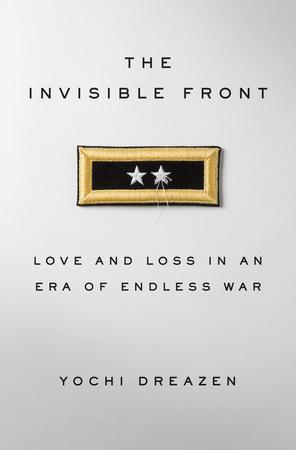 The Center for a New American Security (CNAS) hosted the book launch for The Invisible Front: Love and Loss in an Era of Endless War by Yochi Dreazen, the managing editor at Foreign Policy and a former CNAS writer in residence, on Thursday, October 9, from 5:00 p.m. to 7:30 p.m. The conversation will be moderated by CBS News Chief White House Correspondent Major Garrett.

About the Book:
The Invisible Front is the story of how one family tries to set aside their grief and find purpose in almost unimaginable loss. The Grahams work to change how the Army treats those with PTSD (posttraumatic stress disorder) and to erase the stigma that prevents suicidal troops from getting the help they need before making the darkest of choices. Their fight offers a window into the military’s institutional shortcomings and its resistance to change – failures that have allowed more than 2,000 troops to take their own lives since 2001. Yochi Dreazen, an award-winning journalist who has covered the military since 2003, was granted remarkable access to the Graham family and tells their story in the full context of two of America’s longest wars. Mr. Dreazen places Mark and Carol Graham’s personal journey, which begins when they fall in love in college and continues through the end of Mark's 34-year career in the Army, against the backdrop of the military’s ongoing suicide spike.

The Invisible Front: Love and Loss in an Era of Endless War will be on sale before and after the event. Mr. Dreazen will be available to sign copies after the discussion from 7:00 to 7:30 p.m.

About the Speakers
Yochi Dreazen
Yochi Dreazen is the managing editor of Foreign Policy and former writer-in-residence at CNAS. Throughout his career, he has covered the wars in Iraq and Afghanistan for The Wall Street Journal and has reported from more than 30 countries. His writing has appeared in The Atlantic, The Washington Post and other publications. The Invisible Front is his first book and was a finalist for the 2014 J. Anthony Lukas Work-in-Progress Award.