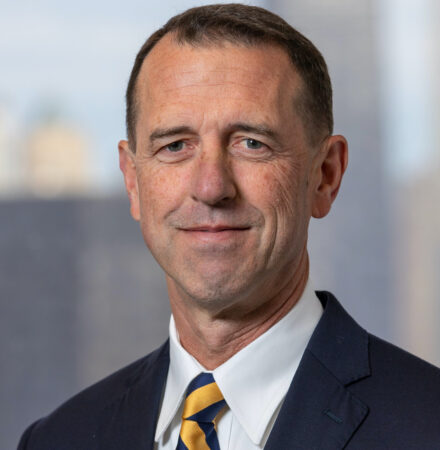 Admiral John Richardson graduated from the U.S. Naval Academy in 1982 with a Bachelor of Science in Physics. He holds master’s degrees in electrical engineering from the Massachusetts Institute of Technology and Woods Hole Oceanographic Institution, and a master’s degree in National Security Strategy from the National War College.

His staff assignments include naval aide to the President, the teacher for prospective submarine commanding officers, the Joint Staff Operations Directorate, and the Director of Strategy and Policy at U.S. Joint Forces Command.

Richardson served on teams that have been awarded the Presidential Unit Citation and other awards for outstanding team performance. He was awarded the Vice Admiral James Bond Stockdale Inspirational Leadership Award for his time in command of USS Honolulu.

Richardson was the Director of the Naval Nuclear Propulsion Program from 2012 until 2015. He served as the 31st Chief of Naval Operations (CNO) from 2015 until August, 2019, when he retired from the Navy after 37 years of service.

Since leaving the Navy, Richardson has joined the Board of Directors for The Exelon Corporation and The Boeing Company, and the Board of Trustees for the Woods Hole Oceanographic Institution.