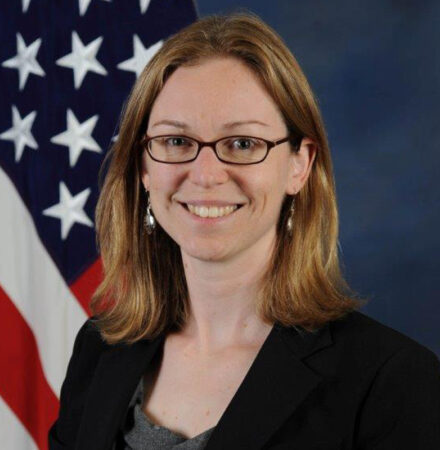 Alice Hunt Friend is a former adjunct senior fellow at the Center for a New American Security. She earned her PhD at American University’s School of International Service, where she wrote a dissertation on the civil-military relations of special operations, unmanned aerial vehicles, and cyber warfare.

From 2012 to 2014, she was the principal director for African Affairs in OSD Policy where she focused primarily on Libya, Mali, South Sudan, and the Great Lakes region. She joined the Department of Defense in 2009 as special assistant to the Under Secretary of Defense for Policy and also served as senior advisor to the Deputy Under Secretary of Defense for Strategy, Plans and Forces and country director for Pakistan.

She has held a research position the Center for Strategic and International Studies in Washington. Her international experience includes work with the International Labor Organization in Geneva and with the Senegalese Association for Research, Study, and Aid to Development.

Ms. Friend is the author of numerous opinion pieces and book chapters, contributor to and editor for several reports, and has appeared as a guest on C-SPAN and as a witness before the Senate Foreign Relations Committee. She holds a Master’s degree in International Relations from American University and earned her Bachelor’s degree in Government from Smith College. She speaks French and Spanish.