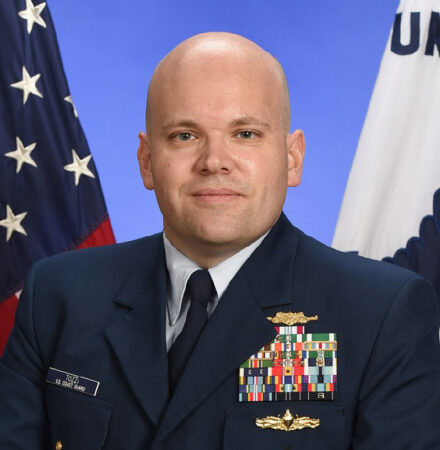 CDR Gregory Tozzi was commissioned as an Ensign in the U.S. Coast Guard in May 1998.  He is a designated Cutterman and Surface Warfare Officer with tours as Engineer Officer in Training in USCGC DALLAS (WHEC 716), Navigator in USS BUNKER HILL (CG 52), Engineer Officer in USCGC MORGENTHAU (WHEC 722), and Operations Officer in USCGC BERTHOLF (WMSL 750).  Commander Tozzi has seen service from 75° North to the Australian Bight and from the Black Sea to the Arabian Gulf.

Commander Tozzi served ashore as Chief of the High Endurance Cutter Type Desk at Maintenance and Logistics Command Pacific from 2006-2010, as Coast Guard Attaché at the Embassy of the United States in Malta from 2010-2012, and as the Coast Guard’s Liaison Officer at the Department of State’s Bureau of International Narcotics and Law Enforcement Affairs from 2014-2016.  While assigned as Attaché in Malta, Commander Tozzi participated in the maritime evacuation of Embassy Tripoli, Libya aboard the commercial ferry MARIA DOLORES.

Commander Tozzi graduated from the U.S. Coast Guard Academy in 1998 with a bachelor of science degree in naval architecture and marine engineering.  He holds master of sciences degrees in mechanical engineering and naval architecture and marine engineering from the Massachusetts Institute of Technology and a master of business administration degree from the University of California, Berkeley.  Commander Tozzi represented the Coast Guard as a Massachusetts Institute of Technology Seminar XXI Fellow in 2014-15.  He is married to Emily Tozzi (née Garstka) of Oak Lawn, Illinois.  Their daughter, Eleanor, was born in 2014.