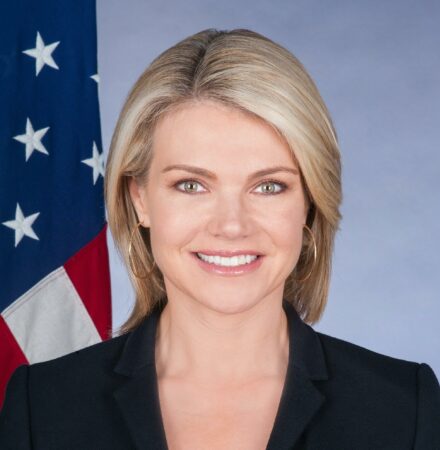 Heather Nauert is a member of the CNAS Board of Advisors. She is also a senior fellow at Hudson Institute, with a focus on U.S. foreign policy.

Nauert served in the State Department as spokesperson from 2017 to 2019 and as acting under secretary for public diplomacy and public affairs from 2018 to 2019. In that dual role, she articulated U.S. foreign policy and coordinated public messaging for the Department, its leadership, and 294 U.S. embassies and consulates worldwide. She also helped plan, execute, and manage messaging on a number of top Department initiatives, including the maximum pressure sanctions campaign on North Korea, holding China accountable for actions in the South China Sea, and efforts to combat state-sponsored disinformation from Russia, China, and Iran.

Nauert serves as an advisory board member for BGR Group, a government relations and public affairs firm in Washington, D.C. where she provides strategic advice and counsel to clients.

She currently serves as member of the President’s Commission on White House Fellowships. In 2019, President Trump appointed Nauert to the Fulbright Foreign Scholarship Board.

Prior to her role at State, Nauert spent nearly 20 years as an anchor and reporter at Fox News and ABC News, where she covered many of the world’s most consequential stories.

Nauert was born in Rockford, Illinois, and spent much of her childhood in Wisconsin. She has an M.A. in journalism from Columbia University and received her B.A. from Mount Vernon College. She lives with her husband and two young children in New York.