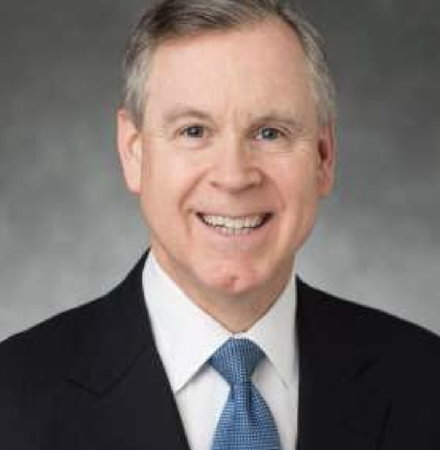 Joe Purcell joined Morgan Stanley in 2010 and is a Vice Chairman in the firm’s Financial Sponsors Coverage Group. He is responsible for a number of Morgan Stanley’s private equity clients, and his experience includes public underwritings of IPOs and equity, debt offerings, mergers and acquisitions advice, private placements, and derivatives transactions. Prior to joining Morgan Stanley, Joe was a Managing Director in investment banking at JPMorgan and was at that firm for 15 years; first as a member of that firm's High Yield group, and later in the Financial Sponsors Coverage Group. Joe served as a Supply Officer in the United Stated Navy from 1980 to 1989 in a variety of assignments, including aboard a nuclear submarine, an aircraft carrier, as a major weapons systems contracting officer in Washington, D.C., and as a special advisor for logistics to the Pakistani Navy in Karachi. Post his active duty assignments, Joe continued to serve in the U.S. Navy Reserves and retired with the rank of Commander. Joe is Co-Chair of the Morgan Stanley Veterans Employee Networking Group, Vice Chairman of the board of Foundations in Education (a non-profit providing educational funding to low income students in the Diocese of Bridgeport, CT), a member of Business Executives for National Security (BENS), a member of the Naval War College Foundation, and an Advisory Board member of the Navy League’s New York City Council. Joe is a 1980 graduate of the College of the Holy Cross, a 1991 graduate of Harvard Business School, and attended the U.S. Naval Postgraduate School. Joe has three grown daughters and resides in Westport, Connecticut with his beautiful wife of many years, Lisa.