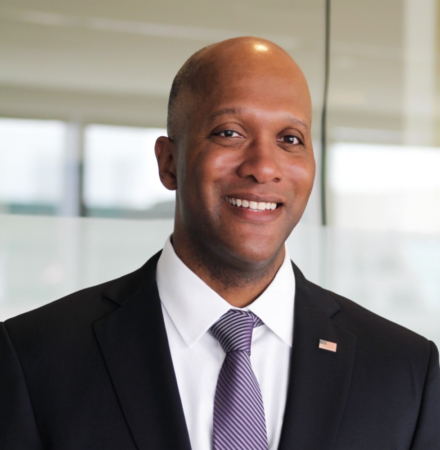 Prior to his current role he served as Deputy Executive Assistant to the Chairman of the Joint Chiefs of Staff. He was the principal assistant to the U.S. armed forces’ senior ranking uniformed officer. Directly supporting the Chairman in his role as senior military advisor to the President.

Lieutenant Colonel Cage entered the Air Force in 2002 and is a career logistics officer with broad experience across the Defense Industrial Base, Interagency, the Middle-East, Afghanistan, Europe and the Indo-Pacific.

Lieutenant Colonel Cage has served at every level to include garrison, and deployed operations, major command headquarters, depot operations, and Headquarters Air Force. He has completed joint staff tours in the North Atlantic Treaty Organization, Office of the Secretary of Defense, and the Joint Staff. Lieutenant Colonel Cage is a two-time squadron commander, leading the largest logistics squadron in the Air Force comprised of over 800 Airmen.

Lieutenant Colonel Cage received his Bachelors’ degree from Virginia Tech where he was a member of the Air Force ROTC program and the Corps of Cadets. He also holds a Master’s degree from Webster University and has completed post-graduate work at the Kenan Flagler Business School at the University of North Carolina at Chapel Hill, the Haslam School of Business at the University of Tennessee, the Joint Forces Staff College, and Air University.