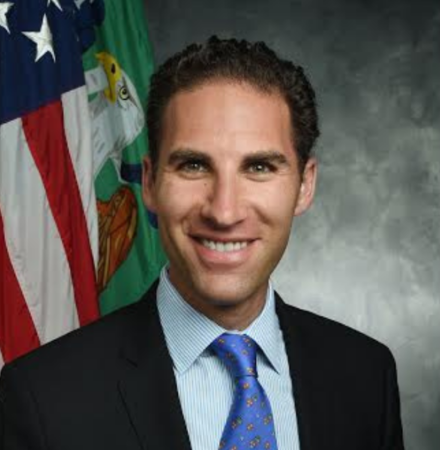 Michael Greenwald is an Adjunct Senior Fellow for the Energy, Economics and Security Program.

He is a thought leader on the digital asset market and a former financial diplomat. He works directly in the technology sector as Global Lead, Digital Assets for Amazon Web Services.

Previously, Michael was the first US Treasury attaché to Qatar and Kuwait, acting as the principal liaison to the banking sector in those nations, while serving in two presidential administrations and under three treasury secretaries. He held counterterrorism and intelligence roles requiring travel to over 20 countries, and served on the US Treasury team that crafted sanctions against Russia, ISIS and Al-Qaeda.

After departing the Treasury, he used his knowledge of international and monetary policy to help lead the growth of global multi-family office, Tiedemann Advisors. He helped oversee the firm's growth from $12B in assets to over $30B and served as Director for Digital Asset Education.

Michael is a speaker, author and commentator on the global economy, digital currencies and contemporary art market. He is a Fellow at the Atlantic Council and Harvard Kennedy School Belfer Center for Science & International Affairs, where he has published over 50 articles. In 2020 he published an Atlantic Council report, The Future of the US Dollar: Weaponizing the US Financial System. He has been featured in Barron's, Financial Times and on CNBC, and has lectured at Harvard, Stanford and the Council on Foreign Relations.

His philanthropic work has included: Chair of the US Holocaust Memorial Museum, Next Generation Board and various board work in the public and private sectors. He holds a JD from Boston University School of Law, MA from Boston University’s Pardee School of Global Studies and BA, History from George Washington. Raised in Brookline, MA, he resides in Palm Beach, FL with his wife and is on the Board of The Town of Palm Beach Investment Committee.