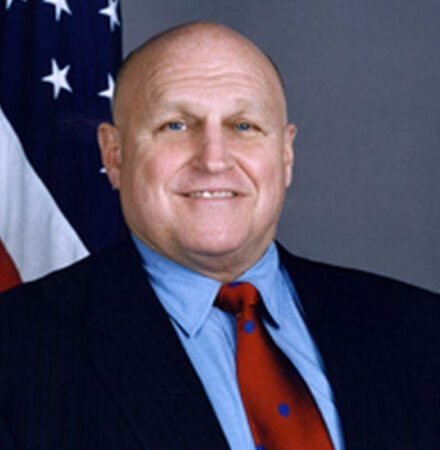 Beginning March 2005, Richard L. Armitage became President of Armitage International. Previously, his nomination as Deputy Secretary of State was confirmed by the Senate on March 23, 2001. He was sworn in on March 26, 2001.

Prior to returning to government service in 2001, Mr. Armitage was President of Armitage Associates L.C. from May 1993 until March 2001. He had been engaged in a range of worldwide business and public policy endeavors as well as frequent public speaking and writing.

From March 1992 until his departure from public service in May 1993, Mr. Armitage (with the personal rank of Ambassador) directed U.S. assistance to the new independent states (NIS) of the former Soviet Union.

From 1989 through 1992, Mr. Armitage filled key diplomatic positions as Presidential Special Negotiator for the Philippines Military Bases Agreement and Special Mediator for Water in the Middle East. President Bush sent him as a Special Emissary to Jordan’s King Hussein during the 1991 Gulf War.

In the Pentagon from June 1983 to May 1989, he served as Assistant Secretary of Defense for International Security Affairs.

In May 1975 Mr. Armitage came to Washington as a Pentagon consultant and was posted in Tehran, Iran, until November 1976. Following two years in the private sector, he took the position as Administrative Assistant to Senator Robert Dole of Kansas in 1978. In the 1980 Reagan campaign, Mr. Armitage was senior advisor to the Interim Foreign Policy Advisory board, which prepared the President-Elect for major international policy issues confronting the new administration. From 1981 until June 1983 Mr. Armitage was Deputy assistant Secretary of Defense for East Asia and Pacific Affairs in the Office of the Secretary of Defense.

Born in 1945, Mr. Armitage graduated in 1967 from the U.S. Naval Academy, where he was commissioned an Ensign in the U.S. Navy. He served on a destroyer stationed on the Vietnam gunline and subsequently completed three combat tours with the riverine/advisory forces in Vietnam. Fluent in Vietnamese, Mr. Armitage left active duty in 1973 and joined the U.S. Defense Attache Office, Saigon. Immediately prior to the fall of Saigon, he organized and led the removal of Vietnamese naval assets and personnel from the country. In 2012, Mr. Armitage received the Distinguished Graduate Award from the U.S. Naval Academy.

He has received numerous U.S. military decorations as well as decorations from the governments of Thailand, Republic of Korea, Bahrain, and Pakistan.

Her Majesty the Queen appointed Mr. Armitage an Honorary Companion of The New Zealand Order of Merit on June 6, 2011. He was appointed in recognition of his services to New Zealand - U.S. relations. On October 13, 2010, Mr. Armitage was appointed as an Honorary Companion of the Order of Australia. On December 15, 2005, Mr. Armitage was awarded a KBE and became a Knight Commander of the Order of St. Michael and St. George. The President of Romania conferred upon Mr. Armitage Romania's highest civil order, The Order of the Star of Romania, with the rank of Commander, "for the constant support towards the development and consolidation of bilateral relations between the United States of America and Romania, for the support of our country's efforts to join the North Atlantic Treaty Organization."

Mr. Armitage currently serves on the Board of Directors of ConocoPhillips, ManTech International Corporation and Transcu Ltd., is a member of The American Academy of Diplomacy as well as a member of the Board of Trustees of the Center for Strategic and International Studies (CSIS.) He was most recently awarded the Department of State Distinguished Service Award. He has been awarded the Department of Defense Medal for Distinguished Public Service four times, the Secretary of Defense Medal for Outstanding Public Service, the Chairman of the Joint Chiefs Award for Outstanding Public Service, the Presidential Citizens Medal, presented by the President to citizens who have performed exemplary deeds of service, and the Department of State Distinguished Honor Award.