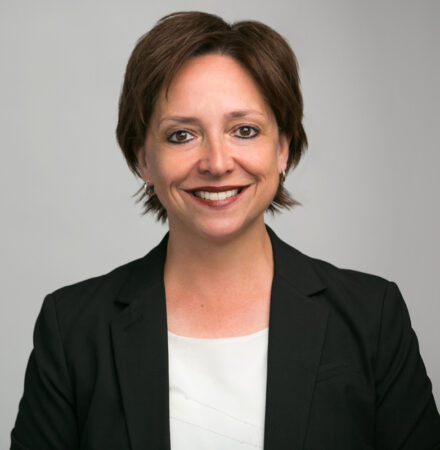 Wendy R. Anderson is a former Adjunct Senior Fellow of the Military, Veterans, and Society Program at the Center for a New American Security (CNAS). She is also the Managing Director of Military and National Security Initiatives at Strong Eagle Media, a Los Angeles-based media company committed to producing films chronicling the stories of U.S. troops who have served in the wars in Iraq and Afghanistan.

While at the Department, Ms. Anderson was twice awarded the Department of Defense Medal for Distinguished Public Service, the Department’s highest civilian service award, presented by Secretaries of Defense Leon Panetta and Chuck Hagel. She was also awarded the Joint Meritorious Unit Award for her service in the Office of the Secretary of Defense. In July 2014, National Journal described Anderson as one of the “25 Women Who Shape National Policy.”

Prior to joining the Department in 2010, she held a number of senior positions in the U.S. Senate for six years. From 2007 to 2010, she served as professional staff on the U.S. Senate Homeland Security and Governmental Affairs Committee, managing the international security portfolio for the Subcommittee on International Security, and was lead staff on South Asia (Afghanistan and Pakistan) and the Middle East. During her Senate tenure, she also served as the intelligence liaison for Senator Barbara Mikulski on the Senate Select Committee on Intelligence and as the Foreign Policy/Military Legislative Assistant for Senator Frank Lautenberg.

While Deputy Director of External Affairs at the Women and Public Policy Program at Harvard University’s John F. Kennedy School of Government, Ms. Anderson worked on conflict resolution and post-conflict reconstruction – especially the contributions of women to peace building – in South Asia, the Middle East, and Sub-Saharan Africa. In this role, Anderson traveled extensively and coordinated with government and business leaders, journalists and educators, and local community organizations in the Balkans, Burundi, Cyprus, India, Israel and the West Bank, Northern Ireland, and Rwanda. As a 1993-1994 Thomas J. Watson Fellowship recipient, she studied the prevention of violent conflict – and the role of religion as both a source of international conflict and a resource for peacemaking – in Russia, Israel, the West Bank and Gaza Strip, and India.

Ms. Anderson received her Bachelor’s degree from Hendrix College, a Master’s degree in Philosophy and Religion from Harvard Divinity School, and a Master’s degree in International Affairs from Columbia University’s School of International and Public Affairs. She is a Senior Advisor at the Truman National Security Project. She is also a member of the Council on Foreign Relations and served on the Council’s 2009-2010 Independent Task Force on Pakistan and Afghanistan.