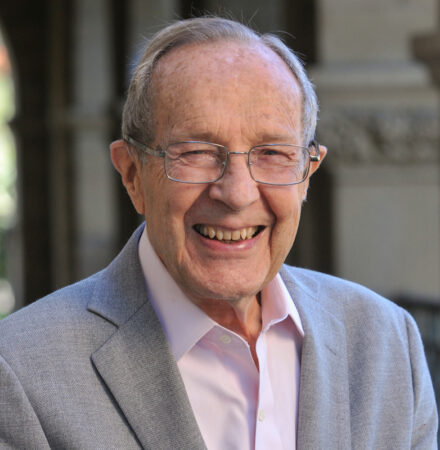 William J. Perry, a senior fellow at the Hoover Institution, is the Michael and Barbara Berberian Professor at Stanford University, with a joint appointment in the School of Engineering and the Institute for International Studies, where he is codirector of the Preventive Defense Project, a research collaboration of Stanford and Harvard Universities. Perry was the nineteenth United States secretary of defense, serving from February 1994 to January 1997. His previous government experience was as deputy secretary of defense (1993–94) and undersecretary of defense for research and engineering (1977–81).  Perry's business experience includes serving as a laboratory director for General Telephone and Electronics (1954–64); founding and serving as the president of ESL (1964–77); executive vice-president of Hambrecht & Quist (1981–85); and founding and serving as the chairman of Technology Strategies and Alliances (1985–93). He serves on the board of directors of Anteon International Corporation and several emerging high-tech companies and is chairman of Global Technology Partners.  Perry was born October 11, 1927, in Vandergrift, Pennsylvania. He attended grade school and high school in Butler, Pennsylvania. He received his B.S. and M.S. degrees from Stanford University and his Ph.D. from Pennsylvania State, all in mathematics. He is a member of the National Academy of Engineering and a fellow of the American Academy of Arts and Sciences. From 1946 to 1947, Perry was an enlisted man in the Army Corps of Engineers and served in the Army of Occupation in Japan. He joined the Reserve Officer Training Corps in 1948 and was a second lieutenant in the army reserves from 1950 to 1955.  Perry has received numerous awards, including the Presidential Medal of Freedom (1997), the Department of Defense Distinguished Service Medal (1980 and again in 1981), and Outstanding Civilian Service Medals from the army (1962 and 1997), the air force (1997), the navy (1997), the Defense Intelligence Agency (1977 and 1997), the National Aeronautics and Space Administration (1981), and the coast guard (1997). He received the American Electronic Association's Medal of Achievement (1980), the Eisenhower Award (1996), the Marshall Award (1997), the Forrestal Medal (1994), and the Henry Stimson Medal (1994). The National Academy of Engineering selected him for the Arthur Bueche Medal (1996). He has been honored with awards from the enlisted personnel of the army, navy, and air force. Perry has received decorations from the governments of Germany, England, France, Korea, Albania, Poland, Ukraine, Bahrain, Slovenia, Hungary, and Japan.