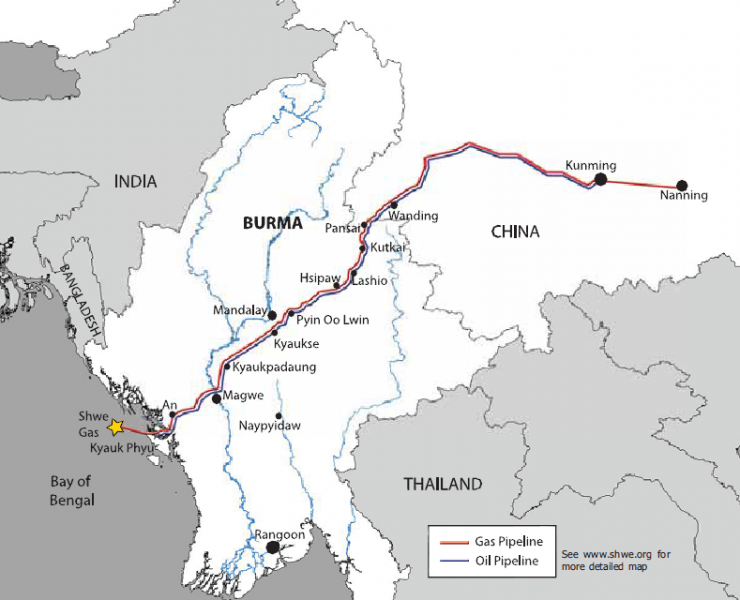 Burma’s Shwe Pipeline project could begin delivering oil and natural gas to China as early as 2013, providing China some relief from its so-called Malacca Dilemma and potentially changing its strategic calculus with respect to energy resources in the South China Sea.

The Strait of Malacca has long posed a strategic vulnerability to China. Up to 80 percent of China’s Persian Gulf and African oil imports pass through this energy chokepoint nestled between Indonesia and Malaysia, fomenting anxiety in Beijing that any obstruction of the strait or neighboring sea lanes could have an immediate impact on the Chinese economy and stability.  “[I]f the Malacca Strait were closed for just one day, the disruption in energy supplies might cause social unrest in China, according to a well-placed officer of the People’s Liberation Army,” wrote Patrick M. Cronin and Robert D. Kaplan in a January 2012 CNAS study on the South China Sea.

China’s Malacca Dilemma has exacerbated fears over assured access to energy resources and could be influencing Beijing’s assertive behavior in the South China Sea. Despite the uncertainty over how much oil and natural gas actually lays beneath the South China Sea, policymakers in Beijing appear to be making a bet that those energy resources could provide some strategic relief from its energy problems elsewhere, particularly the Strait of Malacca. Moreover, China’s vast infrastructure of overland energy pipelines from Central Asia carries strategic risk as well. Those energy resources must cross through vulnerable transit states like Pakistan and are delivered to western China, where Beijing’s influence waxes and wanes.

From China’s perspective, the South China Sea’s potential energy resources may be the only ones that it can guarantee access to, even if it does not have internationally recognized claims to those resources. Consequently, neighbors in the region are seeing more assertive behavior from China over its territorial claims in the region. For example, Beijing seems to have increased deployments of its maritime safety administration forces in parts of the South China Sea. Moreover, it’s using economic coercion against countries like the Philippines and others. (A trade dispute that began in March between the Philippines and China over Philippine banana exports seems to have worsened as a result of a standoff between Manila and Beijing over the Scarborough Shoal.)

Burma’s pipeline project could potentially assuage some of China’s concerns by providing another route through which Middle East and African petroleum resources could be delivered to China without having to ply the vulnerable Strait of Malacca. This could help mollify Chinese concerns over assured access to energy resources and potentially reduce the strategic value of the unknown petroleum resources in the South China Sea.

Beijing’s strategic calculus won’t change overnight, of course. The Burmese pipeline, once it’s online, will need to prove its strategic worth. This will likely require years of Burmese stability and secure transportation of oil and natural gas from the Bay of Bengal to China’s southern provinces. But perhaps in time Beijing will temper it behavior in the South China Sea. Much of this will depend on political developments in Burma, a country where stability is far from guaranteed.