Londonstani has decamped to Pakistan for the coming weeks (and possibly months). Although, his assignment this time doesn't involve news reporting or undercover investigative journalism, habits of a career lifetime are proving hard to drop. So, to fill the psychological gap as well as the hole in Pakistan coverage, Londonstani will aim to provide AM readers the details and context behind the headlines.

Before anyone thinks this is in danger of becoming a little too serious and grown up, rest assured Londonstani will be mining his information in Pakistan's best underground  dens of inequity. And, anyway, will probably exploit this opportunity to indulge his secret desire to have actually been a celebrity reporter.

Anyone looking to find out what gossip and overheard conversations can add to some of the most challenging foreign policy questions of the day, should stay tuned.... 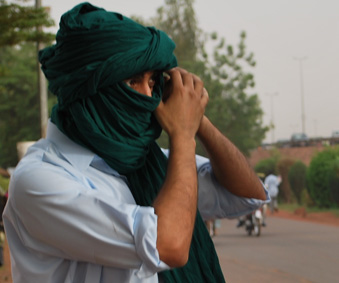 It's a bit of a jolt to find yourself in Islamabad, the capital of a country seen by some policy makers in Washington as the real centre of the  fight against international terrorism. You expect burnt buildings, menacing soldiers, at least a few bullet holes. You expect something like.. well, at least Khartoum, which is facing an insurgency 1,000 kms away in Darfur. What you get in Islamabad are tree-lined streets, grass verges, Walls ice cream sold on bicycles and some very relaxed people. So relaxed in fact, that a suicide bomb going off within ear shot elicts only a shrug.

Zein had spent the last 10 minutes explaining to me why an Indian writer's new book on the founding father of Pakistan was worth reading. We had been inspecting the stack of copies arranged into an in-store attraction when we heard the blast.

"We've been on high alert for the past few days. I guess that was why," was all Zein said as I looked at him quizzically. I learnt later that a suicide attacker dressed in the uniform of a Frontier Corps soldier had denoted a bomb at UN offices nearby killing five people, amongst them were two women and an Iraqi.

You expect a country that has a raging insurgency and widespread anti-western sentiment to look kinda ... anti-Western. The wierd thing about Pakistan is that it doesn't. Western brands are everywhere. OK, so this happens in plenty of Arab countries like Jordan and Egypt with pro-western governments that through a dysfunctional engagement with Western economic models have managed to impoverish the majority of their population or have been forced to adopt foreign policies that their population doesn't support (mostly the two are linked).

But, Egyptian and Jordanian high-end book shops don't carry many books on Western politics. OK, so they carry loads more of them than the Borders book store in Brent Cross, northwest London, but still, they tend to be a couple of the big titles of the year, mostly biographies. They almost never carry books by Israeli authors. Any decision to sell Israeli "propaganda" could only come about through national (hysterical) debate and a decision from the president/king. What they wouldn't be doing is arranging Amos Oz into a circular mini-tower on the floor of a bookshop.

Zein returned to telling me about Jinnah - India, Partition, Independence, a (quite sympathetic) book by a former member of India's Hindu nationalist political party about Pakistan's founding father.

"Some people don't like it because they say its boring and full of stuff that we know about Jinnah anyway. Other people say its important that an Indian nationalist politician written it," he told me.

I asked him if he had read it. He said no, but "Miss Fatima" who also works in the shop in her spare time away from studying at university read it as soon as it came out and told him all about it. Miss Fatima had great English. In fact, everyone who seemed to be employed in an office job had great English. I was beginning to feel idiotic for speaking Urdu.

She pointed out other books I might like including; Max Boot's The Savage Wars of Peace, Mark Steyn's America Alone, Michael Dobbs' One Minute to Midnight, a bunch of Steve Coll books and The Man Who Would be King about Josiah Harlan, the 19th century American adventurer in Afghanistan.

The shop had an Urdu section and an English section but most of the books were mixed together. "Books are books," Zein said. Well healed older men came in for the political tomes. One was particularly interested in A Woman in Charge - The Life of Hilary Rodham Clinton. A young housewife wanted Mighty Heart, about the killing of journalist Daniel Pearl.

After buying an Urdu and Pashtu dictionary I sat outside at the Kabul Grill watching a talk show on the state television channel PTV about state efforts to improve women's rights. The journalist and official were both women. As a cynical journalist I wasn't inclined to believe what the official was saying about holding different government agencies to account for their efforts to ensure "gender friendliness", but I couldn't help but notice how half the discussion was in English and unsubtitled. Both women slipped into English in mid sentence without pausing.

The next programme was another discussion, this time with a cultural figure who complained that Pakistan didn't do enough to promote its own indigenous culture. Instead, he said, the whole country was "running to try and be a bad imitation of an American or a Britisher". I liked the fact he said that in English. I liked it almost as his point that visiting foreign dignitaries shouldn't be regaled with "pop shows of starlets singing in English" because "why aim to be second best? It's not like we have a Beyonce to show off anyway."

I was watching this thinking about what it means for the new strategy developing in Washington in relation to Pakistan and Afghanistan.

"We must engage the Pakistani people based on our longterm commitment to helping them build a stable economy, a stronger democracy and a vibrant civil society," says the March whitepaper.

The Western officials who have tried to engage in public diplomacy in the Muslim world, and Pakistan in particular, have made the observation before that there is much familiarity and even affection in societies such as Pakistan which could be built upon. But in those early post 9/11 days, the aim was generally "make them like us enough to not want to kill us."

But the administration is talking now about a more specific aim. OK, so it's still about making them "like us enough to.. etc", but now that means interventions to build civil society, good governance and a bunch of other stuff that will require trust.

And that's a challenge that clever PR alone cannot solve. Zein later walked over to the grill and what he had to say illustrated just far the trust level had fallen.

Zein told me he's from Dir, near the border with Afghanistan, one of the areas swept up in the army's recent campaign against insurgents. Dir had been emptied of inhabitants, he said. He'd moved his family to Rawalpindi, near Islamabad and they were living in a rented house that he hoped to be able to continue paying for. He didn't know what had happened to his family's home or their belongings. But he was thankful that he and his brother's had jobs and their family wasn't in a refugee camp.

Who did he blame, I asked. Well, he said, it was the army that destroyed the houses when it came to dislodge militants. And, it was the army that was picking up young men and taking them into custody after which they would never be heard of again. There had been talk of reconstruction, money for which the Americans were supposed to be providing, but Zein thought that even if that was true, it wouldn't get past corrupt politicians.

Weren't the militants to blame for provoking the army, I asked. The militants, he said, were mainly foreign agents who had paid some local mercenaries to fight for their side. "They are Israelis, Indians and Americans," he said.

Zein's belief that the root of his troubles lies outside the country's borders is one I have found often in other communities afflicted by internal conflict. And it's understandable. Almost without exception, people find it difficult to believe that their neighbours, friends and even relatives could be blood thirsty killers. In simple terms, people cannot believe those they have grown up with could have carried out the actions they have seen on television.

This is as true for Iraqis and British Muslims as it is for the American and British public. The average American finds it tough to imagine a marine, no different from his neighbour's chirpy, good humoured son, could be involved in an atrocity like Haditha. Similarly, a Brit looks at the faces of British soldiers and sees his mates down the pub or his Sunday football team mates. How would any of them abuse prisoners. And, it's just as personal for Zein.

But without recognising that the insurgents are home grown, Pakistan is caught in a catch 22 situation. As long as the war is seen as a result of American policy in Afghanistan, or an American secret aim to destabilise Pakistan, the county's government's will never have the politician backing to carryout the fighting and building it needs to do for its own longterm survival. As it stands now, the army's action, according to Zein, is creating new resentment that will push more people to fight the state.

"People didn't really have a good reason to fight the state before, but now every family with a missing son will want to fight," he said before adding, "This is going to go on for the next 10 to 12 years."